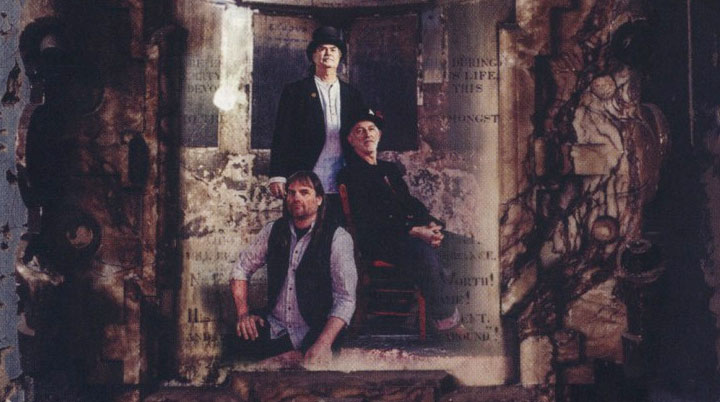 Layer of Ages is Gigspanner’s third album and it is a glorious musical tour de force from the opening glissando of Bows of London to the final pizzicato in Hard Times of Old England. Titled in full Peter Knight’s Gigspanner, this trio is the creation of Peter who, since he left Steeleye Span in 2013, joined forces with guitarist Roger Flack and percussionist Vincent Salzfaas to produce brilliantly crafted and inventive music. Unhindered by the limits of technical ability, they take music rooted in the British Isles and with the flick of a bow, a finely chosen chord or slip of a beat, produce hypnotic arrangements layered in Eastern European, French, Cajun, African and even Aboriginal influences, touching on baroque, classical and jazz along the way.

Peter Knight has a wonderful voice with a variety of timbres, magically combining lightness with the heft necessary for the often dark and disturbing themes of broadsides and ballads.  It is with such a tale, Bows of London, an unsettling story of sister murdering sister, that the trio open their account on the album.  In an ironic twist, the ill-fated sister’s remains are fashioned into an enchanted violin which, despite being able to play only the one tune, has the power of speech, and the denouement is set. Such is the stuff of nightmares and Knight’s voice lays it bare while his fiddle darts through intricately beautiful improvisations and counter melodies, underpinned by the lightest of percussive touches.  Simply exquisite.

Light and energy tumble out of She Moves Through The Fair, with embellishments that lead the tune wilfully astray along different tempos and moods, with notes seemingly plucked from the stars and rhythms from the equator as the band move through airs, jigs and reels before touching down again on home soil.  The mood changes for Death and The Lady, a menacing tale akin to the medieval morality plays, wherein we learn that the Grim Reaper cannot be bought off with gold.  The scene is set with rhythmic double-stopping from the fiddle, Salzfaas’ beckoning drumbeats and Flack’s bass.  The fiddle sometimes sings, sometimes growls and reverberates with menace. The outcome is inevitable. Knight’s fiddle and Flack’s guitar solos cut like blades. There is no escape, not for the Lady nor the listener.

What makes Gigspanner unique is the variety of musical colours on their palette. What makes them brilliant is how they blend them without ever muddying the landscape. Their arrangements are crystal clear throughout, from the voyeuristic Mad Tom of Bedlam, complete with howling guitar and multi-layered vocal harmonies to the pastoral A Week Before Easter and Down by Sally Gardens with simpler accompaniments, thematic variations and classical embellishments. In  King of the Fairies they set hornpipe against rumba, add a dash of Hot Club, sharpen it up with some tenor banjo and let the fiddle soar above it all.  Salzfaas’ conga work is outstanding, shifting pace, beats and flavours while Flack shows us his jazz chops and dancing above it all is Knight’s fiddle.  They follow it with Knight’s own tune, Louisiana Flack, a ‘four hands on the fiddle’ number which is fast, flashy and hot as gumbo.

Hard Times of Old England is a valedictory masterpiece with raindrop-like pizzicato fiddle to set the mood against the trio’s range of delicate textures and touches, with Flack’s guitar ringing bell-like over Salzfaas’ deftly-placed beats. Knight’s vocals are heartfelt and the fiddle shimmers with variety.

Gigspanner is band slang for a bottle-opener. Produced by the band and Edward Blakeley, who also gets a well-deserved banjo credit, Layers of Ages is music of the very finest vintage. Get a bottle now, spring the top and savour the flavours.