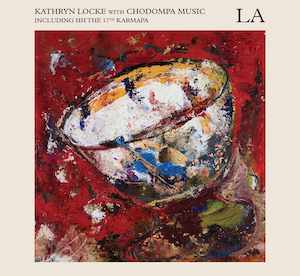 Kathryn Locke describes herself as a “composer and wayward cellist.”  How she evolved to fit this description is a story in itself. She is a self-taught musician who allows her style and techniques to be informed by what she observes of the way other musicians move hands and bodies whilst playing. Kathryn has worked with many established musicians over the years and has composed extensively for theatre and dance. Latterly she was forced by illness to take time away from playing professionally but she continued to experiment letting her technique and voice evolve further. Together with Sarah Allen (flutes), Jo Freya (saxophone and clarinet), Jo May (percussion) and Geoff Coombs (mandola), she has created Chodompa Music in which there appear to be no boundaries…nothing is off limits.

The album opens with ‘Dancing in the Ancient Dirt’, redolent with the sounds and rhythms of the far eastern culture she has been absorbing while studying meditation at Samye Ling Tibetan Centre in Scotland and those eastern flavours permeate this marvellous collection of music. Through her study she made a connection with His Highness the 17th Karmapa, the head of the Kagyu lineage of Tibetan Buddhism who did her the honour of allowing her to create a work incorporating his voice singing an excerpt from ‘Calling The Guru From Afar’ resulting in the track ‘When The Heart Roars’ which is, for me, one of the highlights of this album.

‘Kilter’ features the rhythmic pulse of Jo May’s percussion and the hypnotic flute of long-time collaborator Sarah Allen, not to mention the occasional flowing lines of mandola from Geoff Coombs who makes the instrument sound, at times, like a sarod or sitar. ‘Firebear’ sees Kathryn heading into more esoteric territory using her cello to create a huge variety of percussive, at times dissonant music sometimes, seemingly, even using her own breath to make the sounds she desires. We then have the joyous dance engendered by ‘Locke’s Lope’ in honour of her late brother, Peter. I don’t know who created the sound of the howling wolf towards the end of this piece but it suits the music wonderfully, as does the inclusion of a balafon in ‘Kuching’.

Chodompa Music is hugely enjoyable and delightfully unpredictable. It will draw you in and keep you engaged. As the notes of the quirky, up-tempo final track ‘Hugger Mugger’ faded away I went straight back to the beginning and began to listen again. I suspect you will too.