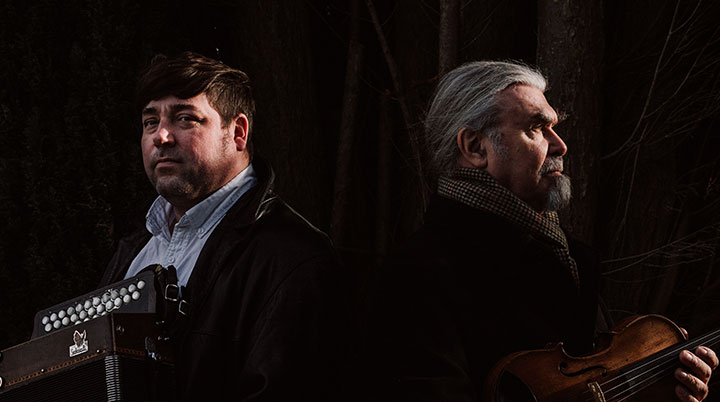 In the summer of 2016, the organisers of FolkEast Festival had the grand idea of pairing Peter Knight (ex-Steeleye Span) and John Spiers (ex-Bellowhead) for a special ‘one off’ concert at that year’s festival.

In the event, it ended up being a genuine festival highlight, with no space to be found in the Marquee and people standing five deep in pouring rain. For a few minutes at the close of their performance, with a standing ovation and roars for more, it didn’t seem as though the audience was going to let them go….it was a genuinely spine tingling occasion. As the MC commented, it was one of those occasions when people could say “I was there”.

It came as no real surprise that the one-off special led to a more permanent arrangement, and with their debut studio album ‘Well Met’ ready for imminent release, Knight and Spiers undertake their first UK tour in March 2018, but if you can’t wait until then, you can catch them for a Special Double bill with the Gigspanner Big Band (featuring Phillip Henry & Hannah Martin) at the end of February, as a prelude to the March dates ..

Then the rest of the tour continues throughout March at the following venues:

22 Basingstoke: The Forge at the Anvil
http://www.anvilarts.org.uk/whats-on/knight-spiers