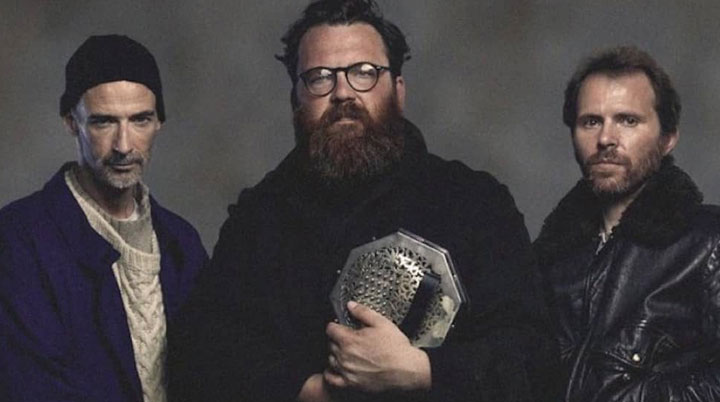 In the last three years, HMS Erebus and Terror, Franklin’s two ships from his ill fated 1845 voyage to find the NW Passage were discovered at the bottom of the icy seas off Northern Canada. This brought the fateful events back into focus after they’d filled the international headlines in the second half of the 19th Century when all 129 of the crew disappeared without trace in the Arctic wastes. With the ‘Franklin’ album, Kings of The South Seas will bring to life the traditional and written music left by these events and their cultural fallout; from Canadian Voyageur paddling songs, English folk ballads and songs composed onboard ice-bound wintering ships to Victoria.

The British expeditions in search of the NW Passage through the North of Canada and in particular the loss of Franklin’s expedition to the ice during the 19th Century affected many. The Navy and families who waited at home, the Inuit encountered and the British public who looked on from afar and seemed to signal the beginning of the end of British Empire. These losses and failures left a large wealth of musical, theatrical and literary material as the nation tried to make sense of events.

‘Lady Franklin’ from where the album take its name, is a broadside from the 1850’s. After the disappearance of her husband, Lady Jane Franklin sponsored several expeditions to discover his fate and worked hard to keep the search going for decades. When explorer John Rae returned with Inuit stories of cannibalism, she refused to believe them, but they’ve subsequently been proven largely accurate. In fact the recent discovery of the two Franklin ships is mainly thanks to Inuit oral histories which were mocked by the British Navy at the time of the ships disappearance. ‘Franklin’ was recorded in St Andrews Mission Church in Gravesend under the glow of stained glass windows dedicated by Lady Franklin (wife of John Franklin) to the sailors who lost their lives on his last voyage.

Following their acclaimed debut ‘Chasing the Whale’ (Navigator 2014) this second release by Kings of The South Seas vividly brings to life the music left by these events and their cultural fallout. ‘Franklin’ features Canadian Voyageur paddling songs, English folk ballads and songs composed onboard ice-bound wintering ships to Victorian parlour pieces – all delivered in powerful, foreboding and effecting style by this unique band.

‘Franklin’ was produced and mixed by Ben Hillier (Blur, Elbow, Depeche Mode) and will be released by up and coming indie folk label, Hudson Records on 2nd February 2018