Kim Edgar – A Question of Firsts 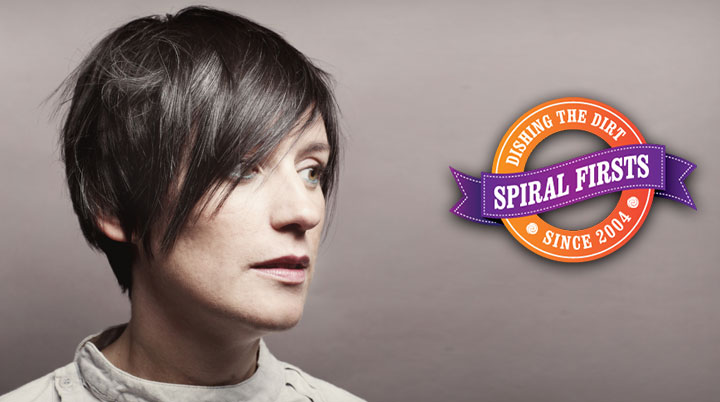 The latest artist to bare their soul for Spiral Earth and give us their list of firsts is singer/songwriter Kim Edgar. Actually, singer/songwriter as a description doesn’t really give her credit for the range of projects she gets herself involved in, from directing youth choirs to being a part of the band Cara, based in Germany. She studied English Language & Literature at university, ‘focusing on horror, fairy tales, feminism and social history’, no wonder the Scotsman in a review found ‘some Angela Carter moments when the mirror cracks and the bitter stuff of fairytales seeps through.’ We said that she is ‘extraordinarily original’.
FIRST RECORD YOU EVER BOUGHT
The Greatest Hits Of Olivia Newton John! As a child, I heard “Physical” as part of an aerobics class on my family summer holiday, and was hooked…
FIRST PERSON WHO MADE YOU WANT TO BE A MUSICIAN
Two women, at around the same time in my childhood: Mrs Park, who taught music in my primary school, because she was so generous and joyful and taught us beautiful songs; and Mrs Newlands, my piano teacher, who was kind and patient and got me excited about songwriting through music theory exercises where I had to set words to music that would support it.
FIRST GIG YOU EVER SAW
It might not have been the first, but the first one that I remember clearly – Tori Amos performing at The Queens Hall in Edinburgh, in 1994. I was completely spellbound by her writing and her intimacy in performance. I also heard a song for the first time that night that wasn’t from any of her albums, and I didn’t know what it was, and didn’t yet have access to the wonder that is the internet. So, I came home and wrote down all the lyrics that I could remember…a couple of years later, my art teacher at high school, who knew I loved Tori Amos, made me a fantastic mix tape of Joni Mitchell and Carole King, and I found the original version of the song – A Case Of You. This began  an obsession with the albums Court and Spark, and Blue, which I listened to almost exclusively for several years.
FIRST PERSON YOU FELL IN LOVE WITH
That would be telling! It was unrequited.
FIRST THING YOU THINK ABOUT IN THE MORNING
What’s happening in the world – I like to begin the day by catching up with the news on TV.
FIRST PERSON YOU’D INVITE TO A PARTY
Stephen Fry – I absolutely love how his mind works, and I could listen to him talking for hours!
FIRST THING YOU’LL BUY WHEN YOU MAKE YOUR FIRST MILLION
I can’t think of anything that I need that would require so much money…but if I ever have enough to spare, I’d love to buy a Volkswagen camper van.
FIRST THING YOU’LL ABOLISH WHEN YOU RULE THE WORLD
“Them and us” thinking.
FIRST ALBUM YOU’D SAVE IF YOUR HOUSE WENT UP IN FLAMES
Young Man In America by Anais Mitchell: it’s absolutely beautiful and I listen to it more than any other album at the moment.
FIRST PERSON YOU’D SEND ON A ONE-WAY TICKET TO THE HEART OF THE SUN
That seems a bit harsh for anyone. But the first person who I would like to be able to change, on account of their flawed thinking and their huge position of power: Donald Trump.
FIRST THING YOU EVER PERFORMED IN PUBLIC
Ooh…my childhood was peppered with performances, but I’m not clear which one would have been first. It could have been a Robert Burns poem or song, as our primary school took part in annual competitions for the Burns Federation, or it could have been any number of hymns in my church music group, where I learned to play the guitar and flute.
FIRST SONG YOU’D HAVE PLAYED AT YOUR FUNERAL
I haven’t given this one any thought yet – I’ll come back to you on that 😉
FIRST INSTRUMENT YOU EVER OWNED
There was always a piano in my house, growing up, but the first instrument that I think was mine was a miniature guitar. I’m sure it wasn’t tuned…
FIRST PERSON YOU’D RAISE FROM THE DEAD
My dad. I miss him.
FIRST PLACE YOU’D VISIT IN A TIME MACHINE
Anywhere Jesus was teaching while he was on the earth. I’d love to meet him in person (to confirm that he definitely was a person), and if this was indeed possible, to witness firsthand if he was simply a human with good ideas or if he was from “God”. Then again, maybe it would be impossible to tell.
FIRST TRACK ON YOUR APPLE MUSIC OR SPOTIFY MOST PLAYED LIST
I don’t do that stuff…but I play “Young Man In America” from the album of the same name by Anais Mitchell the most, for sure.
FIRST TRACK ON YOUR IMAGINARY ALBUM OF YOUR OWN GREATEST HITS
I’m still working on any hits 😉 Writing songs that I’m pleased with and that also appeal to a large number of people is quite a challenge, I’m finding…
FIRST PERSON YOU’D ASK TO JOIN YOUR ALL-STAR BAND
There are so many people I’d like to play with! And I’m really lucky that I have already had the privilege to work with some of them. But if I had to choose just one…Mattie Foulds on drums. He’s my favourite drummer in the world 🙂
FIRST THING YOU’D LIKE TO CHANGE ABOUT YOURSELF
I’d remove my social anxiety.
FIRST ARTIST YOU’D BOOK TO APPEAR AT YOUR OWN UNLIMITED BUDGET FESTIVAL