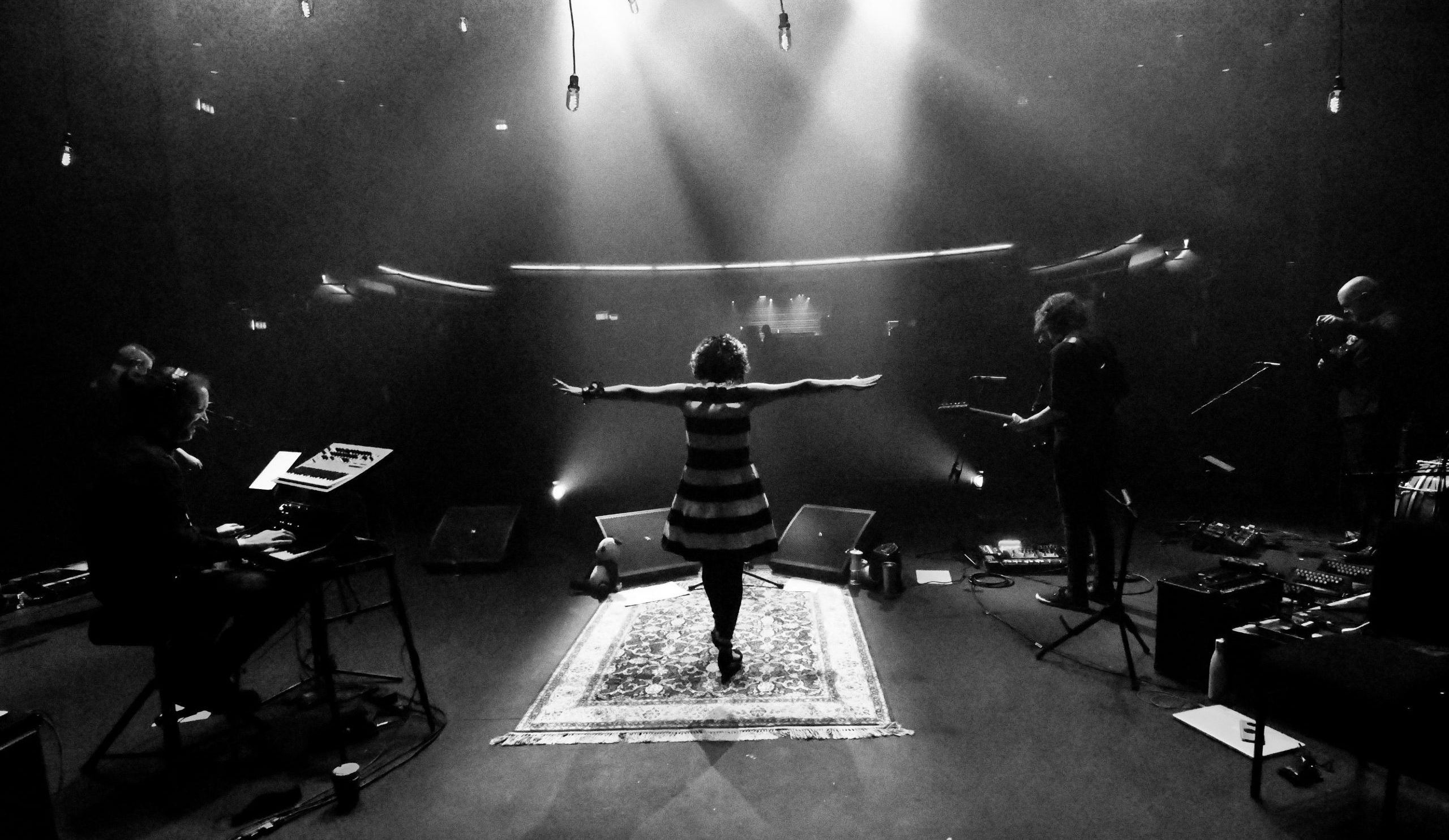 Premiering the track on the BBC Radio 2 Folk Show, Mark Radcliffe commented: “The first track released is “We Will Sing” featuring the joyous sound of Ladysmith Black Mambazo.  You can see the quality of guests that Kate is able to attract.”

If you ask Kate, she has always performed “We Will Sing” with Ladysmith Black Mambazo, albeit hearing them sing along inside her own head. She’s still picking her jaw off the floor over the fact that the actual Ladysmith Black Mambazo actually said yes to singing it with her to open the actual album. The South Africa/South Yorkshire collaboration reminds us that the world is full of such diverse folk and those folk can co-exist in glorious harmony.

If every artist has a ‘performing age’, different from the facts on their passport, then Kate Rusby turns thirty this year. It was in 1992 that she stood, close to alimentary havoc, at Holmfirth Festival clutching a red Guild guitar borrowed from family friend and playwright Willy Russell and played her first proper gig. Five minutes after she’d finished that set and sworn ‘never again’, Alan Bearman booked her for Sidmouth Festival. Thank goodness for Alan. And Kate, obviously. The road began in Holmfirth. She’s walked it ever since.

Her impressive 30-year career has seen Kate release 19 widely praised albums and net a Mercury Music Prize nomination early on in 1999. More awards and accolades followed, including two honorary doctorates. She’s headlined major venues around the UK, from the Royal Albert Hall to Cambridge Folk Festival, and internationally, and also established her own successful record company, Pure Records, alongside her family.

Kate’s music has been used in various films and TV shows over the years, including Ricky Gervais’ Afterlife Series 3 (Netflix), Ruth Jones’ Stella (Sky 1), Heartlands starring Michael Sheen (Miramax) and throughout series 1 and 2 of Jennifer Saunders’ Jam And Jerusalem (BBC), to name but a few. She has attracted numerous celebrity fans along the way too, including Matt Lucas, Stephen Fry, Brian Cox, Ade Edmondson and Paul Weller.

“Music has taken me all over the world in those 30 years, where I’ve met the most incredible musicians and singers. 30 : Happy Returns is a culmination of those years, the music, the singers, the laughs, the songs, the memories. Here I am joined by some of my all-time musical heroes, Ladysmith Black Mambazo, Richard Hawley, KT Tunstall, Darlingside, Beth Nielsen Chapman, Sarah Jarosz, Damien O’Kane, Sam Kelly not to mention the amazing lads in my band! I am in awe of their talent and generosity in sharing it and can safely say there are so many “dream come true” moments on this album. By my very nature I’ve never been ambitious so I am astounded taking this retrospective look over the years and feel so blessed to sing with these incredible artists. I am one very happy, happy girl!!”

Kate’s new album, 30: Happy Returns partly celebrates the moment when a star was born three decades ago. It’s a birthday party, of sorts. It’s even more of an anniversary piece. Anniversaries are all about relationships and togetherness. So is this album. Thirtieth anniversaries bring pleasant bafflement over where the time has gone and (hopefully) how time has flown and (hopefully) reminiscence on the evergreen love and joy that have been shared along the way. So does this album.

As much as we’re raising a glass to Kate Rusby and wishing her many happy returns here, she’s reciprocating those thankful sentiments entirely.

Fifteen songs see Kate returning to points in a stellar career. The tracks span the eight studio albums from Sleepless in 1999 to Philosophers, Poets & Kings in 2019. The songs themselves return to this anniversary gathering as old friends, ones whom we know well and are delighted to see – Pure Records alumni returning to their alma mater. Not only do these ‘oldies’ still seem utterly familiar to us, but we also notice that they’ve turned up for this reunion looking enviably fresh and new. That sense of invigoration reflects how the selected songs have been re-turned/recrafted by Kate and by her producer, band leader and husband, the multi-talented Damien O’Kane. The importance of shared experience – roads walked, people met and songs sung – is reflected by the number of collaborations on 30: Happy Returns, with vocal contributions from Ladysmith Black Mambazo, Richard Hawley, Darlingside, KT Tunstall, Sarah Jarosz, Sam Kelly, Dan Tyminski, Beth Nielsen Chapman and that splendid O’Kane chap again. The CD edition offers a bonus track in ‘Secret Keeper’, the commission Kate recorded in 2018 with the Royal Northern Sinfonia for the Great Exhibition of the North.

Kate and her band will tour the UK in April and May with dates as follows:

“Looking back, I firmly believe music chose me, not the other way round.”