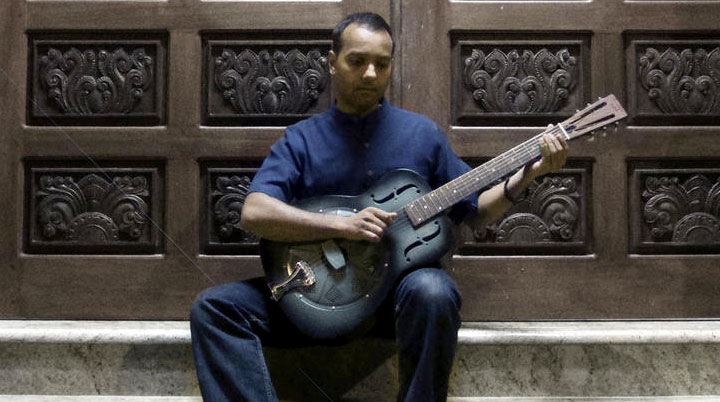 Could you get further apart in musical terms than delta blues and Indian folk music? When an album comes along that combines such seemingly contrasting and idiosyncratic styles as the Blues and Indian Folk, one’s initial reaction is easily one of trepidation.

Ajay Srivastav dispels any such fears instantly with the opening track Six Armed Goddess. Actually he blows them out of the water with an assured swagger, and he knows how to swagger… Now bear with me as I rehash his bio for you, as it’s really interesting; Ajay was brought up in North London in the Indian community that is the very definition of ‘vibrant’. He describes the background music in the family home as ‘faith music and folk songs sung by his parents, as well as Bollywood music blasting out from the kitchen stereo’. He knew how to shake his hips from a young age.

He picked up a guitar as a teenager and disappeared down a rabbit hole on the trail of influences, from the likes of the Beatles and Rolling Stones, back to their source in the Blues masters such as Muddy Waters and further on to Robert Johnson and Bukka White. He had real talent as well, he was spotted by an A&R man at a jam night in the 90s. Quite possibly this was the last time that an A&R exec ever stepped out of an office, preferring to do it all via Youtube these days.

Before long, Ajay was doing session work for some pretty heavy hitters, Jamiroquai, Brand New Heavies and Gregory Isaacs. As a side project he started a five piece funk outfit Maya. Yes, he now had the funk as well.

Not satisfied with that he became a Hindi-pop success on the UK Asian music scene, became the first British Asian to be signed to the Indian label T-Series, and re-located to Mumbai for a while to soak it all up. At some point around now he also got Soul, forming ‘Bollywood’s answer to Sly & the Family Stone’ in the band Botown. They topped the charts and one song even got played on Eastenders.

Still with me? We’ve ticked off Rock, Blues, Funk, Soul, Bollywood, World and Pop. There’s probably Jazz in there somewhere as well. But it comes back to the Blues, always the Blues, that magnetic north that draws so many musical voyagers to its shores. And so we come to his new album Karmic Blues.

A key element in the album’s genesis seems to have been a trip to his father’s home town on Varanasi, in Uttar Pradesh. This city has a history extending back some 1,300 years, over 2,000 temples line the labyrinthine streets and it is the holiest of the seven holy sites of Hinduism. Buddhism was founded here and the city is still a centre for pilgrimage and religious devotion. It sounds like Ajay was struggling with the near existential crisis that all of us with any level of compassion are feeling these days. And I guess that is something that the Blues addresses, sung with a ‘full heart and a troubled spirit’.

Lyrically, Ajay addresses these spiritual concerns of how we fit into the world around us, musically he transcends genres and offers a synthesis of two worlds. That he does it so perfectly shouldn’t really be a surprise I guess, given his track record. Deep down there is a trance like quality to both musical styles that are wedded together so well here. Ajay has a wonderful playing style on his resonator guitar, and this is where the real synthesis lies. It is also what makes the album a real pleasure.