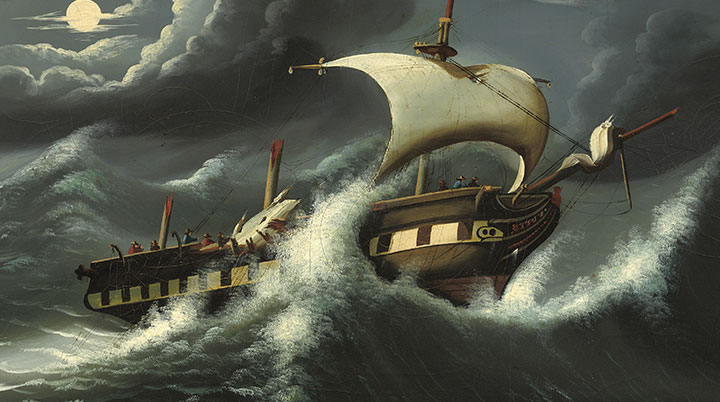 Of late, music releases from Terry Allen have proved almost as elusive as the whale in the title of his latest, ‘Just Like Moby Dick’. That’s not to accuse him of being lazy as he keeps himself busy enough with his art – a quick look at his website will reveal this. So, as a good friend of mine has said, the release of new music from Terry Allen is “an event of note”.

We have the Paradise of Bachelors label to thank for this new record as well as some re-releases of music from his back catalogue. Following their success with Michael Chapman, there is no doubt that they’ll be hoping to awaken a younger audience to Terry Allen. This new record could just do the trick.

To an extent, Terry Allen is recognised as a musician’s musician following collaborations with David Byrne, Guy Clark, Steve Earle and Lucinda Williams, as well as having songs covered and championed by the likes of Jason Isbell, Little Feat, Sturgill Simpson, and Kurt Vile. So, unsurprisingly, ‘Just Like Moby Dick’ includes co-written songs involving fellow musicians such as Joe Ely (‘All That’s Left Is Fare-The-Well’) and Dave Alvin (‘Death Of The Last Stripper’) as well as co-production, vocals and guitar from Charlie Sexton whose known for his work with Bob Dylan and David Bowie amongst others. Terry’s son, Bukka Allen, plays keyboards and accordion alongside the ever present Panhandle Mystery Band members, Lloyd Maines (pedal steel, slide guitar and dobro) and Richard Bowden (fiddle).

The opening track, ‘Houdini Didn’t Like The Spiritualists’, not only finds Allen drawing from the dark well of his wicked sense of humour but introduces Shannon McNally on duetting vocal. Her vocal work, whether as duet partner or on harmony, is central to several tracks helping to flesh out the arrangements further than we heard on the album’s sparser predecessor, ‘Bottom Of The World’.

That’s not to say all the tracks depart from the trademark, stripped back, Tex-Mex flavouring of Allen and his Panhandle Mystery Band. For example, ‘Death Of The Last Stripper’ is a lament that could have been found on an earlier album such as ‘Juarez’. It just flags that a lot of careful work has gone into the writing, arranging and producing of this record in a manner that makes it one of his richest offerings to date.

At the centre of the record, he dips into past projects with unrecorded material from 2003, ‘Civil Defense’ and ‘Little Puppet Thing’, making a medley of songs with ‘Bad Kiss’ that reflects on the spectre of war, past and present. Returning to the light, Shannon McNally takes the lead vocal on the sublime ‘All These Blues Go Walkin’ By’ and ‘Harmony Two’ bookending a surreal consideration of modern life on ‘City of the Vampires’ with its encouragement to “go exercise the elephants, ohh ohh, while you can”.

The album closes with ‘Sailin’ On Through’ with its reflection on the passing of life and a closing lyric that delivers the title of this album. Whilst the Moby Dick connection remains quite elusive, that’s surely the intention as a metaphor of mystery. What is clear, to these ears, is that January 2020 has already delivered one of the albums of the year.