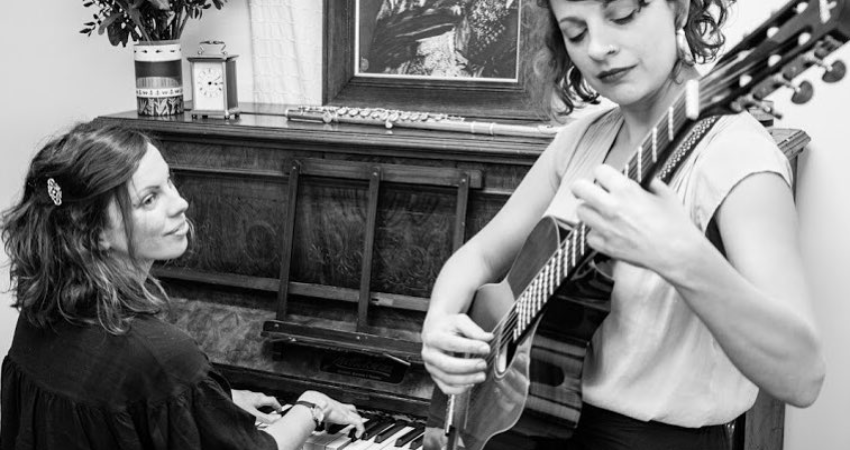 After just over a year playing music together, Julu Irvine & Heg Brignall have taken the folk scene by storm with their unusual and fresh approach to folk music. Their songs, which are a mixture of traditional and original, are reflections of the world around them. Their harmony-rich songs tell tales of struggle and triumph against all odds; of heroes from both their own lives and from stories they have found. Taking much inspiration from strong female characters in history, mythology and personal experience, Julu and Heg create evocative songs with a deeply moving and pure sound using the musical line up of vocal harmonies, guitar, flute and piano.

Alongside their captivating original folk music, the duo create unique arrangements of traditional songs, often changing the endings to songs where the female characters are less fortunate, allowing the poor heartbroken maids to rise into triumphant heroes. What makes them stand out is their wonderful chemistry and charisma on stage, natural humour and two beautifully matched voices to tell their stories.

They each have been involved in a multitude of other touring musical projects gaining recognition across the folk and popular music scenes including BBC Introducing; national magazine press; UK and European tours; busy festival seasons including Cambridge, Sidmouth, Glastonbury and other major festivals. The two now come together for the first time, using powerful song writing, weaving stories and crisp vocal harmonies to create a beautiful, distinctive sound.

Their home-recorded debut four-track EP Unfair Maids was released in 2018 and features some of the well known traditional songs which helped the duo establish their sound. After months of gigging and writing together, they have honed and developed their music into the idiosyncratic sound that has been making such an impact with audiences. They are about to go into the studio with Lukas Drinkwater at Polyphonic Recordings to start recording their debut album due for release next year.

If you can’t wait until then, you can still catch them live on their autumn tour – dates as follows:

For more details check out their websites