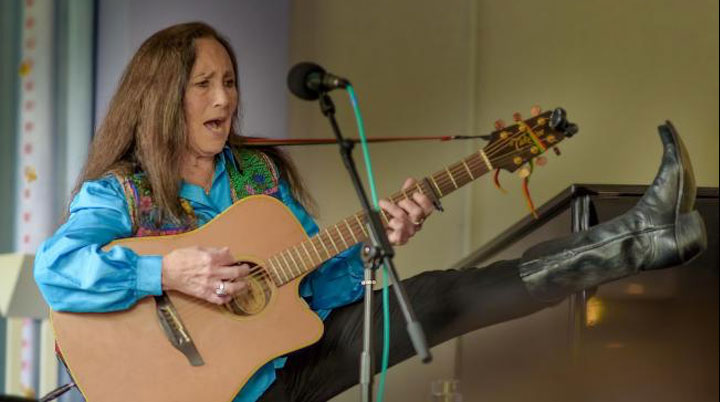 It’s not often remembered that Julie Felix, who passed away on March 22nd aged 81 years, was a major force in music and television during the swinging 60s, a face as familiar as Cilla Black or Twiggy.

She had a BBC show after being a member of David Frost’s satirical ‘Report’ team. Her own series, ‘Once More With Felix,’ included the usual 1960s mix of music and light hearted comedy banter, amongst the guests, The Bee Gees, Spike Milligan, The Kinks, Dusty Springfield and included Jimmy page playing folksy tunes on an acoustic guitar.

Away from the media spotlight she was a serious protest singer, not as in your face as some, but she was committed to causes such as women’s rights, refugees, victims of oppression and the elimination of landmines, she was also an ambassador for various charities including Christian Aid. Miss Felix was also a worker, constantly recording and gigging until she died after a short illness.

She had just released a collaboration with Linda Moylan, ‘Freedom Is A Woman,’ which had steadily been gaining radio play whilst her final album ‘Rock Me Goddess,’ issued last year by Talking Elephant records showed her as strong as ever fronting a satisfying collection with many guest stars from the folk and traditional circuit.

Hit singles came with versions of ‘El Condor Pasa (If I Only Could)’ by Paul Simon and ‘Heaven Is Here,’ from the pen of Errol Brown leader of Hot Chocolate.  Decca, RAK, Fontana and EMI were amongst the labels she recorded for.  As early as 1965 she was the first folk singer to pack out no lesser venue than The Albert Hall.  Latterly she had made her home in Hertfordshire though she had lived and worked on both sides of the Atlantic Ocean being born in Santa Barbara, California.  Julie Felix worked through and lived life to the full.