Journey Through The Roke – Honey & The Bear. 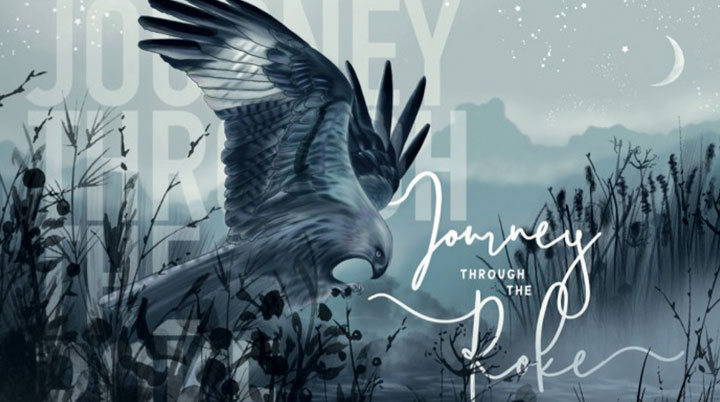 So, what’s a roke? Dialect meaning informs it’s a mist which rises at certain times in the year from a marsh, particularly in fen country. Both Honey and her Bear hail from Suffolk so that pins them down as regional champions, along the lines of Seth Lakeman or Show Of Hands, the musical embodiment of the area they live in. There’s nothing out of place on this their second album having put the time, caused by various lockdowns, to good use writing and preparing for recording the album. In reality Lucy and Jon Hart who use Honey & The Bear as melodic identity are rooted in English soil but take flight on dreams of Americana and wider inspired stylings. ‘Journey,’ is a substantial album taking more than few cursory spins to reveal its hidden depths.

Supported by several of the Lost Boys, from Sam Kelly and not Peter Pan, the instrumentation is wide mixing some decent electric guitar alongside the more familiar fiddle, squeezebox , acoustic strings. Whilst this is a reflection of their debut, the music’s progressing in terms of arrangement and setting, take ‘The Miller,’ as an example here the strings of double bass and cello get decidedly groovy.

There’s even a nod to the man who should be our sanity and conscious, Sir David Attenborough, ‘Life On Earth,’ has lyrics which echo his wisdom that we should all acknowledge and act on before we destroy the planet. The track neither preaches nor sloganeers simply stating the obvious… listen to the science and get involved.

A few Arabic touches around ‘Unless We Start It,’ edge towards the desert blues. But if you’re looking for delicacy then it’s here in ‘My Lagan Love,’ the one true folk song softly delivered showing the emotion and empathy in Lucy Hart’s voice.

Needless to say ‘Journey,’ is their best work to date and hints at wonders to come, I reckon in a couple of years Honey & The Bear could  be making some devastatingly effective music. Look out for live dates when they eventually return, on this form theirs is a gig which will linger long in the memory. Decent all round.