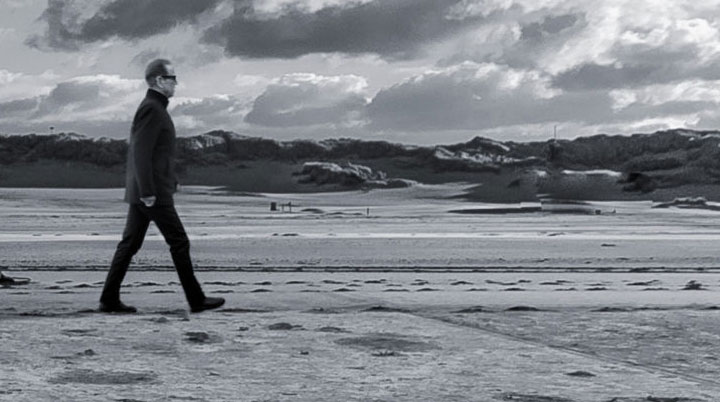 Recorded over three eventful years in the life of all round decent chap and front person for the Oyster Band, the background here is  love for life, country, people, long-distance walking and a turn of serious illness.

John Jones is a restless creative, his rambles over mountain, hill, valley and dale have grown beyond simple hobby into an absorbing passion and since, source of inspiration and artistic endeavour. So, Never Stop Moving equal parts biography, hope, comment and advice stands in line with his first solo effort, as a reflection of one of the most individual and confident artists in roots music. The whole thing is very English, you’d expect nothing else from one so long in traction with The Oysters and indeed certain cuts have their unmistakeable sound; comfort and assurance amongst the rather glum subject matter. Take your pick, shootings, hanging, transportation, long forgotten villages, comas, hard labour on the high seas, a barrel of laughs this isn’t, but what emerges is John Jones’s optimism. Having just seen him as part of Oysters 3 dedicate All That Way For This to the Tory government you know you’re on a sympathetic, socialist ground here. Could this be the first sighting of melodic Corbynism? We can but hope and as I noted earlier hope is what JJ has in stacks, even in the darkest moments, he lights a candle and calls everyone together.

If you really want me to pick some choice cuts, opener Down By The Lake is a modern folk song, contemplation on the way we expect the young to shoulder responsibility before they’re ready for it. She Wrote Her Name Today is a surge of melancholy which lifts into hope – er.. did I mention there’s heaps of that here – at the song’s closing. Pierrepoint’s Farewell is a moving lyric, set to a lilting tune wherein the titular character ends up walking away from a responsibility his family has held for generations. Folk echoes throughout Black & White Bird with riddle and imagery deepening a story overheard in the local bar, and as you might expect the traditional does rear its head, the best slice of three being the easy folk rock chug of Jim Jones.

The backing names are stellar, Oysters, Reluctant Ramblers and guest stars, you’ll know most of them, Boff Whalley, Benji Kirkpatrick, Al Scott… and more. Production by the afore mentioned Mr. Scott is clear and precise. It might have been three years in the making, it only takes a few minutes to know this is a work of commitment and wisdom. Canny lads those of the rambling kind.