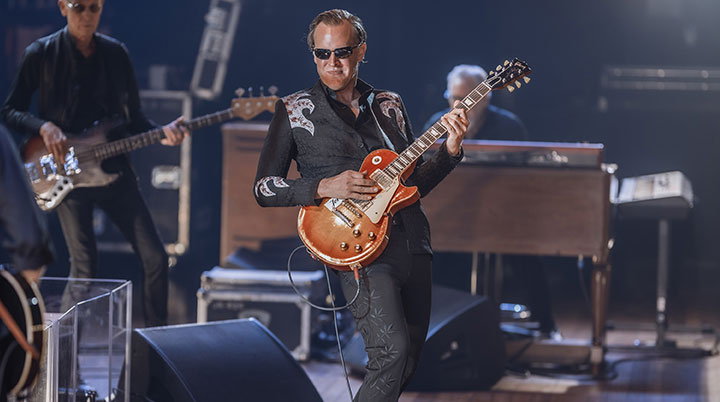 Through adversity triumph tastes all the sweeter. Joe’s last studio album ‘Royal Tea’ had a tortuous road to completion and as the man himself said he felt almost ‘cursed’ as physical mishaps and the pandemic delayed all best laid plans. Despite these obstacles his tribute to the English blues boom proved to be a high watermark in our hero’s illustrious career, though he faced the frustration of not being able to take his latest oeuvre to the masses in a live setting.

‘Now Serving…’ is a document that relates how he reached out to his disciples. Recorded live at his beloved Ryman Auditorium, Nashville in front of 1700 cardboard cut-outs, oh and 17,000 paying customers thanks to the wonders of live streaming, this truly captures this guitar icon at the peak of his powers. As good as ‘Royal Tea’ was – and the album is played in its entirety here – there’s an indefinable quality that can’t be captured in the studio when a bunch of seasoned players lock tight and swing. No need for fancy pyrotechnics and distracting production values here – teapot and cups apart! – the music says it all.

Considering the constraints placed upon the musicians regarding the lack of audience participation and general ambience these are remarkable performances. The sharp suited and booted Bonamassa plays with incredible intensity as he switches guitars and styles with his usual panache. But Joe isn’t the only show in town. This is exemplified best on the autobiographical ‘Conversation with Alice’ where the band really fires on all cylinders. It’s a song that has echoes of 70’s classic rock at its finest as Joe generously allows the extraordinary Rob McNelley to display his amazing chops via the slide guitar. It also gives veteran Reese Wynans on keyboards a chance to revisit the flourishes he no doubt demonstrated alongside pre Allman Brothers cohort Dickie Betts. Reese might be 74 but he plays with a dexterity that belies his advancing years.

Rounding off the night we find Joe once again belying his British influences and chutzpah with original takes on three stone rock classics. Rory Gallagher’s ‘Cradle Rock’ gets a Robin Troweresque intro before morphing into an explosive treatment that occasionally veers closer to hard rock than the blues. We then get an intriguing swing version of Free’s ‘Walk In My Shadow’ followed finally by a breath-taking take on Jethro Tull’s ‘A New Day Yesterday’ segueing with Yes’ ‘Starship Trooper’ that highlights the main man’s versatility. Hilariously as the last note fades to deadly silence Joe nods to the cardboard cut outs and deadpans: ‘Man I’ve played to some tough audiences before!’.

It’s a moot point as to whether Bonamassa will go down as one of the all-time greats. I suppose the naysayers will point out that he’s not particularly innovative. I say who cares? His virtuosity, impeccable taste and passion tick all the boxes for me. He’s keeping the blues alive – and then some.