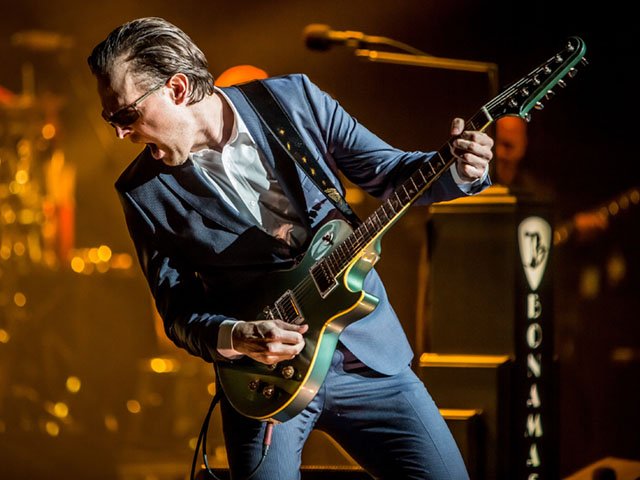 A child prodigy to modern day guitar hero at the age of 43, this documentary pulls back the curtain and chronicles his journey with behind the scenes interviews and live concert footage showcasing some of the biggest names in music. It’s an entertaining testament to a man who built a reputation based on the solid foundations of talent, tenacity and passion, striving to attain excellence in whatever he does.

Possibly the most self-effacing blues-rock star on the planet, he looks like a Wall St banker with his sharp suits and Ray-Bans. Off-stage, he’s modest and has a gentle humour confirming he doesn’t take himself too seriously – but his music, that’s a different matter. His long-time producer Kevin Shirley puts it best describing him as “a man who can walk off stage, take off his shades and walk out of the arena without anybody giving him a second glance.”

This persona belies a single mindedness that can translate into a ruthless pursuit of his muse – just ask former band-mates who fell by the wayside. He first picked up a guitar at the age of four and just eight years later he was crashing the party. His Stevie Ray Vaughan style picking attracted attention and soon he was playing alongside such bona fide legends as BB King and Albert Collins to packed audiences. The clips of a 13 year old Bonamassa tearing it up are truly mind-blowing. You can only marvel that a kid of such tender years could play with such maturity and feeling. I can imagine the despair felt by his peers who probably gave up any thoughts of rock stardom for accountancy!

His perseverance on his journey to the top is personified by his first major label dalliance. Signed by EMI, Bloodline – a calculated “sons of famous musicians” band – was put together to showcase Joe’s talents. It’s fascinating to watch how the sons of Miles Davis, Berry Oakley and Robbie Kreiger defer to the chubby fresh faced 16 year old wunderkid in an a grainy old interview clip, calling him “the old man in the kids body”. Soon after their debut, Joe was on his way exasperated by his band-mates juvenile antics and the lack of drive and intensity he demanded.

Legendary producer and long-time cohort Kevin Shirley is an influence on the Bonamassa story that cannot be underestimated. A man instrumental in his manipulation of Joe’s extraordinary talents he’s been the catalyst for realising the diversity of music recorded. It’s apparent from the studio chatter interspersed on this movie that the guitarist has the utmost respect and trust in this guiding hand, whose intuition has captured those moments of spontaneity that shows off Joe’s fiery guitar playing and incredible song-writing to heart wrenching effect.

This is a frank snapshot of Joe’s rise. He made me laugh out loud when he described the 9 week tour with Black Country Communion as 7 weeks to many. A wolf in sheep’s clothing? –  Maybe. But when he talks about the blues there’s a fire in his eyes. Joe has a message and a mission: “To keep the blues alive and bring it to a new generation. Because, if we don’t keep it in their hearts. It could easily fade away.”

While ‘Smokin’ Joe’ is carrying the torch it’s in safe hands – this film confirms it.