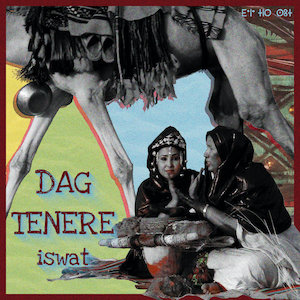 What do you play on a trip up the M6 for a week’s holiday in Galloway? Why obviously the desert blues. Having been a sucker for the snaking and twisting guitar lines of Tinariwen when their work first appeared on these shores, there was no doubt when the latest box of CDs arrived from our esteemed editor and this little diamond popped out what would be the soundtrack to the journey.

A bit of background research finds Dag Tenere means ‘Desert Children’  and they’re a cross cultural group of Tuareg musicians who fuse the simple folk elements of their music with dazzling, splintered electric guitar or rumbling bursts of lead guitar even when matters turn to a more traditional form. Hand claps and djembe are most of the rhythmic elements with bass and guitar which head off towards Hendrix in smart fashion. It’s a hypnotic listen which, if you’re of an eclectic musical mind – and what are you doing reading this if you aren’t? – won’t easily leave your brain. If you’re looking for a musical earworm then ‘Koud Edhaz Emin,’ is going to hang around longer than is decent. It’s made ‘Iswat,’ a regular visitor to the Spiral Earth Review player and it’s weeks since we got back from Scotland.

At a smart six tracks – all of them worth hearing – this isn’t going to break the bank for either previous converts or those new to the genre. I’m going to spotlight  ‘Tihoussay Tenre,’ as my personal delight and traditional tune ‘Iswat,’ is another which’ll curl your socks. Recorded across borders and in various studios the sound is seamless, the production by Antoine Livenais in France, crisp and clear as a desert night. In short: fascinating.