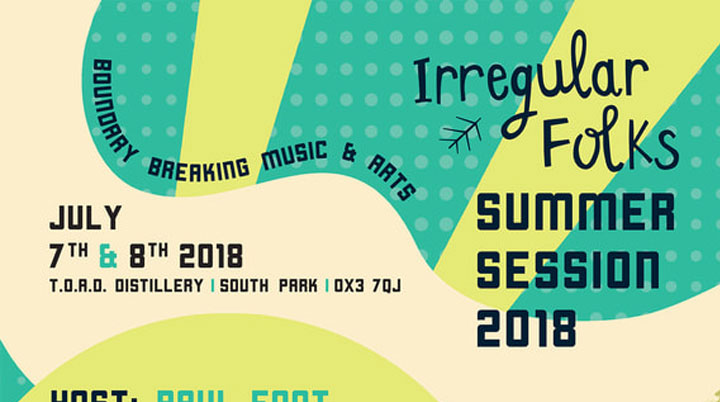 Just two weeks away and Irregular Folks Festival is covering two days for the first time. The press release bills the ‘eclectic music, maverick comedy, artisan drinks, eye-opening cinema, plus a uniquely bizarre lecture series’ However they got me at the bit that says ‘Set in the grounds of an artisan gin distillery’.

IRREGULAR FOLKS SUMMER SESSION 2018 – ABOUT THE FESTIVAL
Irregular Folks’ Summer Session is not a folk festival, it’s an all-day adult-only festival for lovers of the irregular. A festival for folks (noun meaning: people) doing something different and thinking independently. It’s a boundary breaking programme of great, unique music and other art forms to tantalise the ears and eyes, including art, comedy, poetry and film.
Irregular Folks itself is a specialist series of mainly music nights that run irregularly throughout the year. These nights and their yearly flag ship event, the Summer Sessions festival are also about creating stunning environments at an affordable price for which audiences and the artists can really sit back relax and be inspired by truly creative experiences. For more info, previous artists etc, click here.
Catapulting gleefully into what will be its third year, the one of a kind festival will be curating a weekend custom made for the curiously minded.
Featuring another bill brimming with artists of the esoteric and eccentric, some guest speakers of the seriously strange variety, cerebral cinema showings, plus palate-popping delicacies and more, the refreshingly different, adult-only (16+) festival arrives on 7th – 8th July 2018.
Whilst its home will be remaining in the heart of Oxfordshire, there are big plans afoot for the bespoke bash’s latest edition. For the very first time, IRREGULAR FOLKS SUMMER SESSION will not only be taking place across two days, but will also be pitching up at an exciting new site, as hosted by the T.O.A.D.: The Oxford Artisan Distillery, Oxford.
Speaking about this year’s bash, festival organiser Vez says: “I honestly keep pinching myself each day that it’s true – and wow that patch is starting to hurt! Irregular Folks has always been about bringing a super high level of unique creativity to people at an affordable price so people can try out something new. Having this funding means that we not only get to keep this event true to the values of creativity over commercial gain, and improving it year on year, it’s also a big juicy piece of recognition from two exceptionally highly regarded organisations being both The Arts Council and the PRS Foundation’s The Open Fund.”
Each year starts as a dream scenario and I simply cannot wait to put this years dream into action – it just goes to show, don’t be afraid to aim high, work hard and dare to make something happen. There’s support out there to help make the almost impossible possible.”
The refreshingly different, adult-only (16+) festival takes place on 7th – 8th July 2018 at the T.O.A.D.: The Oxford Artisan Distillery, Oxford.
IRREGULAR FOLKS SUMMER SESSION: LINE UPSATURDAY 7 JULY 2018The Main Tent
Host: Paul Foot
Bas Jan Bellatrix  Alabaster de Plume
Jon Ouin A L I C EDespicable Zee
Nick Cope
Sephine Llo+ Tony Njoku
The Odditorium (Middle Barn)
David Bramwell curates & hosts a line up of strange and wonderful talks.
Stilly: Terrible Drawn Tales
Dr. Bramwell: The World’s Worst Orchestra
Tim Pilcher: Superhero Sex
Jen Rowe: Is the Garden of Eden located in Bedford?
Mara Gold: Pussy-cats and Pubes: Historic ways to woo your lesbian lover
Ben Bailey: The Politics of Board Games
Jake Swinhoe: The sweet music of organic carrots
SUNDAY 8 JULY 2018
LAZY SUNDAY FILM DAY1.30pm – Tina T’urner Tea Lady’s Steamy Bingo.
2.30pm – 7pm – Day of Cinema screenings in conjunction with UPP
A Selection of 5 weird and wonderful films & shorts. Full programme TBA
MORE INFORMATION
Website
Facebook
Facebook Event page
Twitter
Instagram