Interview with BBC Musician of the Year – Mohsen Amini

It’s hard to think of a band that has achieved so much and made such an impact on the trad music scene in their first few years, as Glasgow based trio Talisk.

As they head out on a UK tour (April 24-May 3), trio member Mohsen Amini, talks about being the current holder and youngest ever winner of the Musician of the Year title at the BBC Radio 2 Folk Awards – the folk music world’s “Oscars”. A year ago the Glasgow concertina ace, already the winner of BBC Radio Scotland’s Young Traditional Musician of 2016, was in seventh heaven.

At the 2018 BBC Radio 2 Folk Awards, staged in Belfast’s Waterfront Hall , Amini was crowned Musician of the Year moments after the dynamic Scottish five-piece instrumental band Imar – of which he is also a member – won the Horizon Award for best emerging act.

He couldn’t have known then that his reign as Musician of the Year was going to be probably the longest ever in the history of the annual BBC Folk Awards. The awards have been rescheduled from their traditional spring slot to autumn 2019 meaning he retains the title for some 18 months.

Amini, one of the most popular musicians on the folk/acoustic circuit, is a flamboyant force of nature and a natural showman – with eye defying, quick-fire concertina skills and a never failing bonhomie.

He says: “It’s been an unreal time. Last year we travelled all over the place, performed about 180 gigs and took 120 flights, it’s been incredible! I released albums with Talisk, Imar and the quartet Fourth Moon but unfortunately had to stand down from Fourth Moon due to having too many commitments.

“This year I’ve already toured Denmark, Ireland and America with Imar, then we have this spring Talisk tour and several festivals over the summer, from Cambridge and Underneath the Stars in the UK to others in Italy, Portugal and Canada.
“In my opinion music is the best job in the world but it’s not as easy as it seems! Playing is great fun but the reality is that you only play for about 90 minutes every day. The rest of the time is spent driving to the venue, checking into the hotel, sound checking and drinking (lemonade!) at night. You have to be ready to spend a lot of time away from home so it’s not for everyone.” 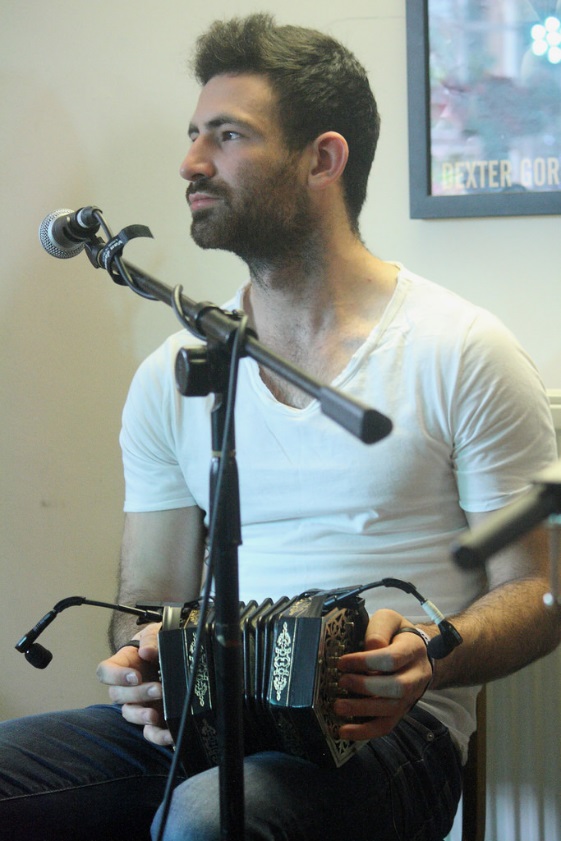 Born in Glasgow 25 years ago to an English mother and Iranian father, Mohsen, who also had an Irish grandfather, first picked up the concertina when he was about 10 years old and was immediately hooked.

“My sister Sophia and I went to Irish dancing classes and the musicians there hosted lessons on Glasgow’s Southside at a branch of the Irish music organisation Comhaltas Ceoltóirí Éireann. I started playing the whistle there. I thought I might go for a few months and then opt for karate classes instead! Then one day the branch got a concertina and no-one had a clue how to play it ; they gave it to me and I managed to get a tune out of it so they said take it home and see what happens – and here I am 15 years later!”

When Mohsen won the BBC Radio Scotland award he was the first concertina player to do so. “It’s an incredible but often overlooked instrument. I haven’t a clue why it struck a chord with me but it did – playing it came naturally and once I started, I couldn’t stop. Over the years I’ve been tutored by folk musicians Mairi Campbell and Catriona McArdle but mostly I guess I’ve been teaching myself. Now my concertina and me are inseparable – I take it everywhere with me so it’s great it’s not too big and can go in hand luggage!”

Mohsen quit a chemical engineering course at Strathclyde University to devote himself to a music career and has no regrets. He says: “The concertina was my passion even though I realised I would earn a lot less playing music than working as an engineer! I just love the whole folk music scene and the camaraderie.”

Mohsen admits he quickly gets bored when it all stops – the only thumb-twiddling he enjoys being on the concertina! “Seeing audiences clap along and making people happy has to be the best job in the world. “

As far as the future goes he says: “I just want to keep progressing my career and never stand still. We are tackling quite a lot of festivals I have always wanted to play in countries I’ve always dreamt of going so I guess the next step would be to figure out a way to headline those festivals! I’m going to try my absolute best to champion the concertina and take it as far as I possibly can. “Awards or not I’m happy playing a concertina for a living though I still find it absolutely crazy from time to time that I’m actually doing it. But life doesn’t get much better than this.”