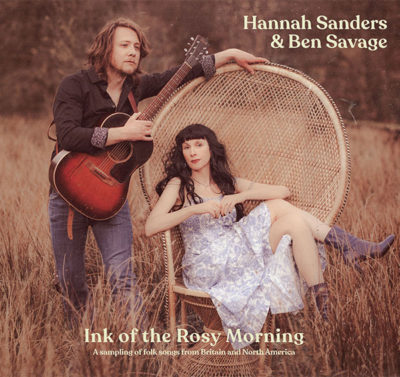 Changing your mind can bring problems. Look, Hannah Sanders and Ben Savage had plans as good as set in concrete for their third album, then what happens? Yes, that pesky pandemic put the brakes on everything. Rather than let matters get to them they turned them to their advantage. Reimaging the record they retreated to an old school in Hastings with minimal equipment and a couple of guitars for company. Instead of adorning the songs they unadorned them and went back to basics.

Intimacy is perhaps the thing people readily think of when folk music is mentioned, yet few actually achieve it. ‘Ink Of The Rosy Morning’ is a salutary lesson in how to make less mean more. Sanders herself possesses the sort of vocal that adapts to different material easily whilst never sounding out of place, Savage after a spell with The Willows plays the kind of thoughtful, fluid guitar that Alan Prosser trademarked in Oysterband. Both of them have a deep respect for traditional music from either side of the Big Pond and it’s from that admiration most of the songs spring.

Of course some work better than others ‘ Polly O Polly,’ is as familiar as a comfy pair of slippers yet here they get inside the song and bring new reverence, similarly they try the old Steeleye chesnut ‘Lark In The Morning,’ but set the bucolic lyric to a much altered tune and alternate vocals so emphasising the conversational elements within. ‘Lovely Joan ’ too breathes clean air, the version here is lighter and friskier more comparable to ‘Sovay’ in spirit, the trickery at the heart of the ballad more mischief than planned deception.

Whilst I’m almost certain this experiment is a result of circumstance and their fourth might well see a return to guest artists, mixing and studio recordings, ‘Ink Of The Rosy Morning,’ is an honest, straightforward offering that gets closer to their concert sound than anything they’ve previously presented to us. It’s also a reminder just how well these two artistically fit together, there are precious few duos about who come close. Warm, unassuming and endearingly wistful.