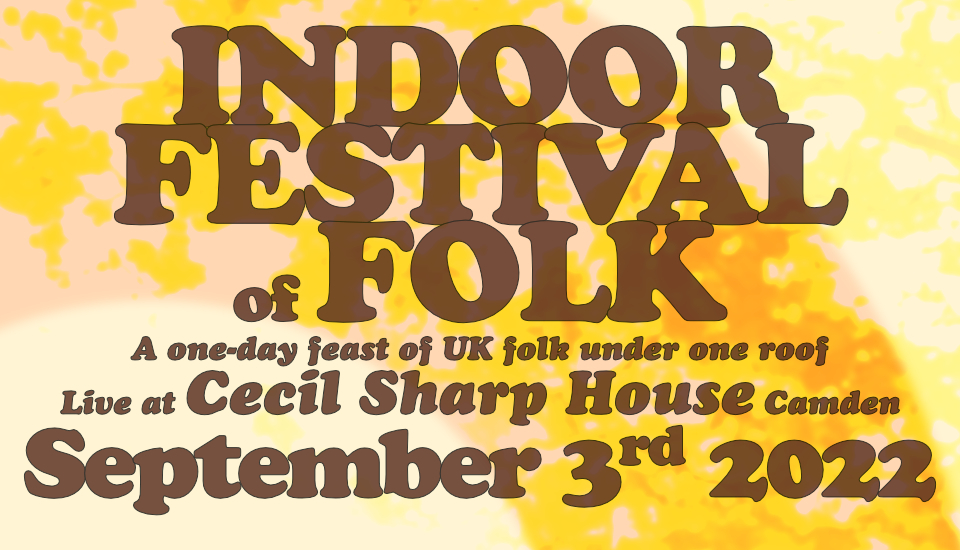 The “Indoor Festival of Folk” is a collaboration between folk/rock band The Magpie Arc and the English Folk Dance and Song Society and features a stellar line up of award-winning UK folk artists performing at Cecil Sharp House, Camden, London on Saturday the 3rd of September 2022.

Appearing on the day are…

Knight and Spiers, the recently formed duo of Steeleye Span’s legendary fiddler Peter Knight and Bellowhead melodeon player extraordinaire John Spiers, who have been whipping up audiences on tour around the country this year in support of their new album “Both In Tune”.

The BBC Folk Singer of the Year Bella Hardy, whose 10th solo album “Love Songs” has just been released this month and sees her return to the traditional folk ballads that she’s known all her life. As The Guardian said “A fine, no-nonsense interpreter of traditional music and an excellent songwriter”

Award winning singer and guitarist Blair Dunlop, solo artist and leader of the rebooted Albion Band. Blair has toured extensively in Europe and Australia, appearing at festivals such as Glastonbury, Cambridge Folk Festival in the UK, and Port Fairy and Woodford in Australia and in 2021 he released his first live record, ‘Trails: Queensland’ which chronicled his 2019/20 tour of the continent

Lizzy Hardingham is one of the rising stars of the UK folk scene. An indomitable folk musician and ornate songstress, 2019 saw her storm the UK folk club and festival scene, including Cambridge Folk Festival, while in 2020 she began to captivate online audiences

The Magpie Arc is a cross border folk/rock band featuring the award-winning talents of Nancy Kerr, Martin Simpson, Findlay Napier, Tom Wright and Alex Hunter.  Formed not long before the first lock-down of 2020 the band released three EP’s during that year and have been champing at the bit to play live ever since. With a busy summer of festivals scheduled for this year, including a main stage appearance at Cambridge, they kicked off with dates in June and as our esteemed reviewer Simon Jones described  “…the possibilities The Magpie Arc offer are very enticing indeed. You owe it to yourself to catch this band as soon as you can. Capability, flair and originality rarely come so well wrapped.”

And finally, a very special presentation of Steeleye Span legends Maddy Prior and Peter Knight in conversation with BBC presenter and Folk On Foot founder Matthew Bannister. Talking all things folk/rock and maybe even chart stardom, Maddy and Peter will also be performing several songs together for the first time in many years, which in itself will be an occasion not to be missed.

So come rain or come shine it will be a fantastic day of music and fun in the beautiful spiritual home of British folk music, Cecil Sharp House, and will come complete with all the home comforts of an indoor gig, including food, drink, facilities and a nice sit down!