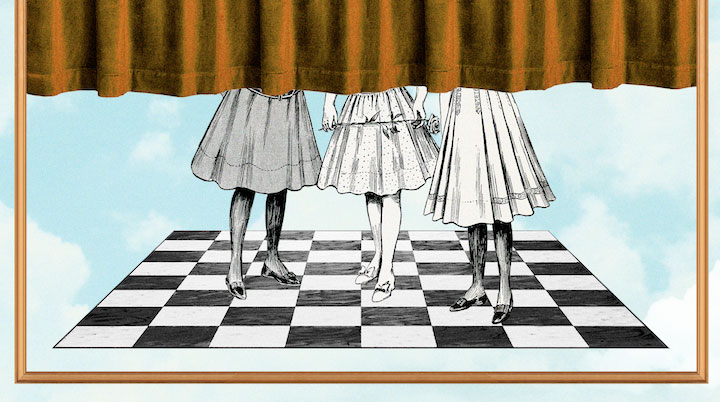 One from the ‘beyond’ section of the review stack, Snowapple are a theatrical, close harmony, Dutch trio. Despite sending no explanation with their album I can tell you theyare Una, Laurien and Laura- thank heaven for the internet. Illusion has an almost Alice in Wonderland picture: three girls on a chess board hidden from view by a big velvet curtain. That alone should tell you that the contents are almost fairytale, even dark. Huge hint here… don’t expect the normal. Parts of the record are by turn fascinating, perplexing and frustrating. What it is, different. What it isn’t, predictable.

I guess what they’d say is they want the album and its contents to be an illusion which they plant in the brain of their listener. These illusions can be by turn sweet and sour such as  in California and Wolves respectively. They could just about get away with folk but there’s more alternative and with all the sly hints of electronica and jazz maybe the girls are really tuned to an individual slipstream which crosses music with the darker fantasies of say… Kate Bush, David Lynch and The Brothers Grimm.
So, it’s an album to escape into, one for bed sit Gothics to delight in the acoustics which mention Evil Wizard, Pale Blue You and Vagabond like everyone should have hollow eyes and be almost translucent. One passing wag made the comment that this sounded like The Smoke Fairies filtered through The Mamas and The Papas with Portishead lurking in the shadows… Okay, but the songs can be delicate whilst complex, working on both appreciation and psyche at the same time. Nowhere do they slip into anything remotely formulaic or familiar though the opener Small Stone, is at least a recognisable lullaby which nimbly trips from one ringing note to the next. Check out the video for it which turns Red Riding Hood into a ghostly, singing schizophrenic.
Illusion is not an album which allows you to ignore it, once heard you’re in for a strange journey.
www.snowapple.nl/
Simon Jones