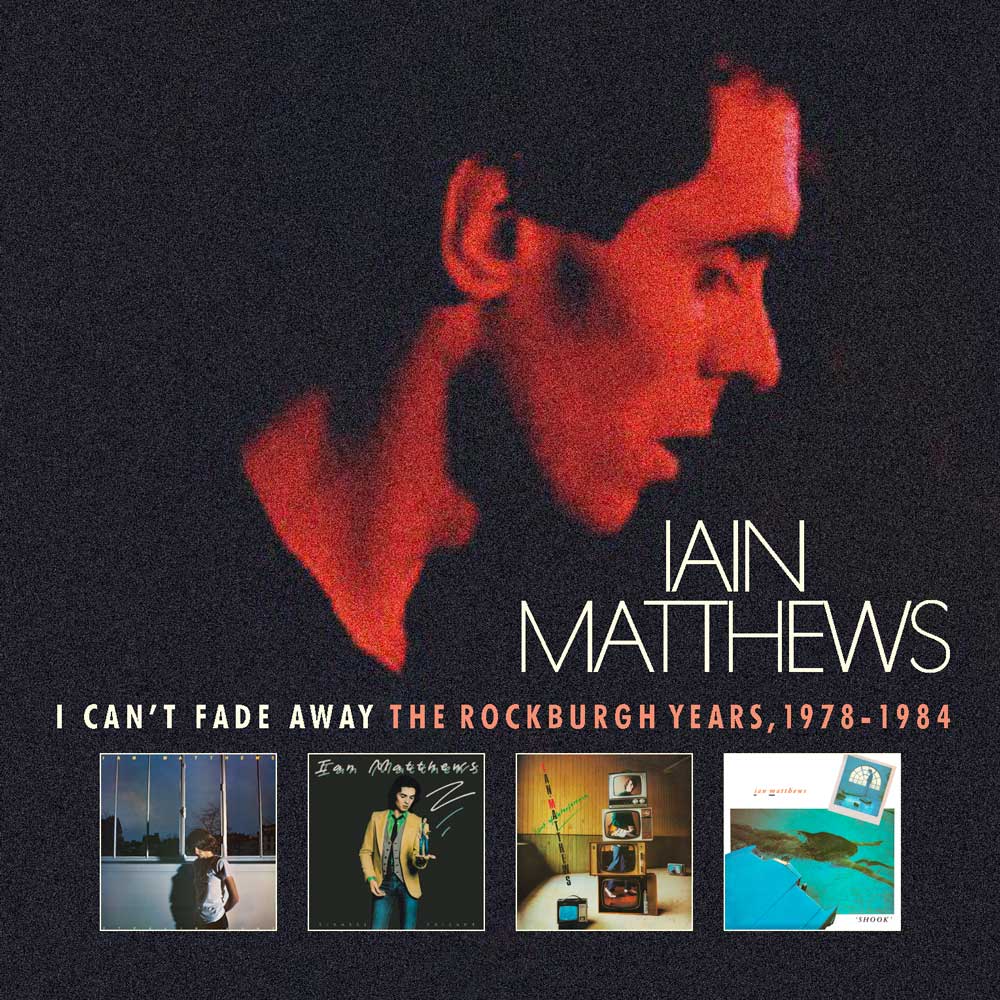 Fade away? He never has done yet and it’ll be a very sad day if he does. It’s a fact that Iain Matthews is prolific, just as much as many of his fellow Fairport luminaries, still despite a stack of recordings as high as Everest ( okay maybe a slight exaggeration there,)  he remains criminally under rated.  Trying to describe his music in terms of simple genre is tricky, yes he did take part in Convention’s early folk rock fusions but he’d already left by the time they dug into the serious electronic traddery of ‘Liege & Lief,’ preferring instead a more  American rootsy based looseness which characterised his albums pre the era documented here. 1978 – 1984 found him definitely in Trans Atlantic groove releasing four albums which bore the obvious markers of US chart success, where ‘Shake It,’ hit the top 20 of the Hot 100, following in the wake of Gerry Rafferty.

Hooking up with his old producer Sandy Roberton, undoubtedly a sensible move,  the titles run , ‘Stealin’ Home,’ ‘Siamese Friends,’ ‘Spot Of Interference,’  ‘Shook,’ and include familiar names among the musicians contributing, ex Steeleye Rick Kemp and old Southern Comforter Mark Griffiths. Throughout Matthews sounds at home, his vocal easily fronting melodic, driving arrangements and a clutch of more tender, reflective ballad material. The strongest offerings are the earliest and by the issue of ‘Shook,’ he was clearly itching to head off in another direction. ‘Stealin’ Home,’ remains the most satisfactory article and should be in the collections of anyone with an ounce of musical taste. It really is a lost gem as Matthews, his band and producer crafted a slice of rooted but across the board appeal, take the version of John Martyn’s ‘Man In The Station,’ which adds more commerciality and funk than is healthy. The singles ‘Gimme An Inch Girl,’ ‘Don’t Hang Up Your Dancin’ Shoes,’ both have a drive and groove to them even when the latter has more plaintive subject matter.

The real treasure here is however to be found in the judicious bonus material which has been assembled by Ron Yaxley, clearly a Matthews aficionado of greater depth and knowledge, not only are there demoes, alternates and live gigs but a fabulous BBC In Concert which is worth the admission price alone. All annotated, sequenced and explained in fascinating detail, the booklet which comes with the box set could stand as a fine example of how music archaeology should be conducted. A round of applause for Mr. Yaxley then.

I found this absorbing. Look, if you only know Iain Matthews for ‘Woodstock,’ then you need to start digging and this is as good a place as any. If you’re already signed up as a fan then you’ll need this for all the extras. Either way you win.