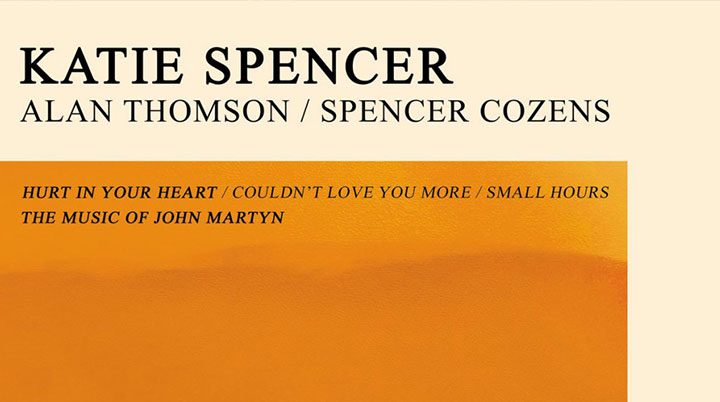 It’s fine for musicians to admit their influence, it’s just that when they come to cover the material of that influence – which is often a classic- well, let’s be honest, the results can fall somewhat short. Question then, how do you cover a musician so idiosyncratic who never made two records the same?  John Martyn if you’re wondering.

You probably got the hint from the title of this short E.P. from alt folk singer Katie Spencer, who’s selected a trio of J.M’s more soulful, lingering and poignant compositions to work on. The originals are signature items from Martyn’s repertoire and easily stake their place to inclusion on any ‘Best Of’ set, so she’s playing with the sacred even attempting them.

However she gets round the conundrum with a smart move placing herself in the company of two long time Martyn sides men, Alan Thomson on bass and Spencer Cozens, keyboards, both musicians who knew  Ian McGeachy – to quite one of his album titles – inside out.

Having such experienced partners helps in resetting the songs in sympathetic form, “ Small Hours,” is the most recognisable, the wash of keys and descending bass capturing the lonely, dawn of the original and Spencer’s elastic vocal in the background mix almost as pliable as Martyn’s own. ‘Hurt In Your Heart,’ still has that tender core which is echoed in a slow, stretched ‘Couldn’t Love You More.’ Both these latter cuts depart somewhat from Martyn’s blueprint whilst suitably reconstructed for a female vocal, Cozens sensitive production buoying the soulful Spencer voice and Thomson’s bass echoing with lightness of touch.

Music for quiet corners, late nights and a glass of decent wine.