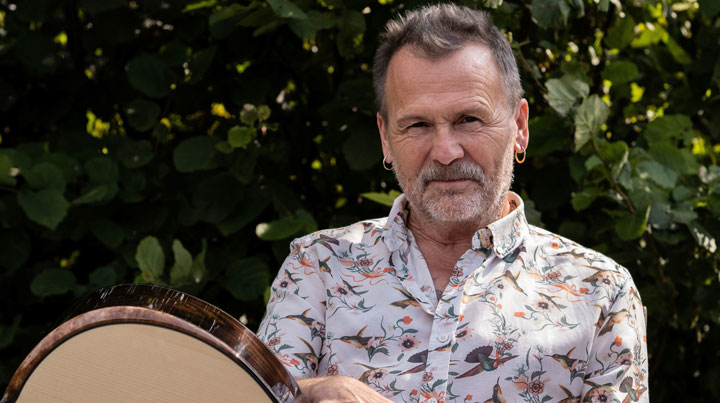 If there’s any benefit at all to be had from the difficult times we’re all living through then it maybe that we have come to appreciate the security and familiarity of home. No longer treating it as casually as we might. Lock down concentrates the mind, glance around everyone’s got new hobbies in which they appreciate their immediate area, gardening, walking the dog, riding your bike – the latter two shouldn’t be tried at the same time- or just strolling down the road. Martin Simpson’s the creative kind anyway so not being able to gig or spruce up tapes for a live effort he diverted his attention into doing what it says in the title, conjuring an album of covers and favourites from sessions in his music room and out on the decking, where whispers tell he overlooks a valley. Neighbour Andy Bell and fellow Magpie Arc Tom Wright helped out with recording and loan of equipment, other contributors include a flock of passing geese – no I’m not kidding – and the garden birds. In some respects it reminded me of John Martyn’s ‘Small Hours.’ The results as you might expect from a master guitar stylist are splendid indeed and a real intense burst of eclectic inspiration which takes in trad, country, blues and even the psych folk of The Incredible String Band; this man knows no boundaries.

Throughout the guitar playing is exemplary and the Simpson vocal as elastic and appropriate as ever. If I’ve got to pick a couple of highlights – believe me the majority of the album is high level – these two are sheer giddiness, ‘The Times They Are A’ Changin’’ kind of appropriate considering everything and ‘House Carpenter,’ which he does so distinctly that you really don’t recall any other version, except another chilling reading done by Mr. Fox back in the early days of folk rock. But decent renditions of John Prine’s ‘Angel From Montgomery,’ tells you the talent we lost back in the Spring and Robin William’s ‘October Song,’ which fits as I look out over the trees around the house whilst I type this: season of mists and mellow fruitfulness and all that. So do you want this? Well of course you do unless you’ve a cauliflower for critical facilities. Martin Simpson has an excellent delivery record and the delivery on this record shows no signs that despite lock down he’s lowering his standards. Out on November put on the calendar and in your diary – written or digital, pre-order link below.