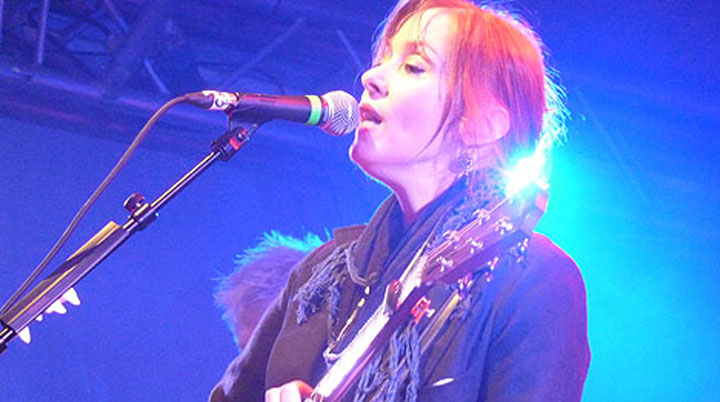 Apparently there was some other festival on this weekend, but the surroundings at Home couldn’t be much more different. And that’s how the organisers intended it; Home was deliberately scheduled for the same weekend as its rather more famous counterpart. Set in the grounds of the Dartington estate in Devon, home of the ‘Dartington experiment’, where, according to their promotional material, 85 years ago, a Dorothy and Leonard Elmhirst set up a “centre for educational, artistic and social experiment.” And it’s easy to see how that ethos is kept alive at this event. Drawing on acoustic and world music traditions, this second year of the festival also has plenty of workshops and stalls, but manages to maintain a level of intimacy by keeping most of the activity centred around the courtyard that holds the main stage. With about 1,000 people (plus numerous children – it’s very family friendly here) it feels less like a “music festival” and more like a garden party thrown by someone with excellent musical connections.

The garden in front of the main stage is as green and as well manicured as the centre court at the start of Wimbledon. And amazingly it remains that way after being trampled for a day and a half – no mud here.

Brighton’s Martha Tilston demonstrates an easy, kooky charm, totally in keeping with Home’s atmosphere. Attempting to lead a sing-along for Red Riding Hood, she tells us the last time she attempted this was with 400 drunk Glaswegians. This attempt seems to go much better as the Home crowd obligingly joins in. Tilston becomes the first act of the day to earn a deserved encore, with Good World, and finally leaves the stage as the crowd continues to sing the refrain of “It’s a fine, fine, fine, fine world.” Very apt for the moment.

Mali’s Tamikrest are carrying on the work started for us in the UK by Tinariwen, bringing the Touareg tradition from the Saharan deserts to the Devon countryside. Band leader Ousmane Ag Mossa announces; “Bon soir, good evening, we don’t speak any English,” before quite literally letting the music do the talking. Blending African traditions and rhythms with Western rock, the effect is hypnotic. Spiralling guitar lines wind around the ululating vocals, sung in their native Tamashek, that soon attracts a sizeable number of dancers at the side of the stage.

Alejandro Toledo and the Magic Tombolinos are the day’s surprise package. This multi-national five piece create a breath-taking blend of the Balkans, Latin, jazz and definitely something funky. Led by classically trained saxophonist Toledo, they play twice during the day, once acoustically in the Great Hall and later on the outdoor stage. Even in the supposedly more relaxed confines of the hall stage, Toledo is a barely contained livewire. But it’s outdoors that they really shine, feeding off the energy of the audience and sending it straight back with interest.

The Great Hall provides a more sedate counterpoint to the activity outside. Under the impressive vaulted ceiling and staging purely acoustic sets in front of the massive fireplace, the likes of sitar player Sheema Mukherjee and Senegalese kora player Seckou Keita are amongst those giving classical recitations and performances of traditional pieces.

Headliner Suzanne Vega is playing only two UK shows this year at the start of a European tour – here and, oh yes, Glastonbury the day after, and as such there’s a feeling that this is something special. The American singer-songwriter is on chatty form and clearly enjoying herself. Unsurprisingly her two best known numbers, Luka and Tom’s Diner, with mass “Do-do-do-doo” sing-along, naturally, finish the set but the crowd would happily have had her back for more.

But the music doesn’t end there, back in the hall erstwhile Robert Plant guitaristJustin Adams and Gambian ritti (one-stringed violin) player perform a low-key take on their usual high-energy partnership. Often when playing live they feed off each other, taking the music down improvisational tangents and locking into trance-like grooves. But here, the acoustic setting, with both musicians seated, there’s a much more sedate vibe, and it provides the perfect come-down to the end of a magical day.

And thankfully, there’s been a distinct lack of Bono’s bombastic sanctimony or Dullplay’s aural wallpaper. Long may Dartington provide a Home from home.