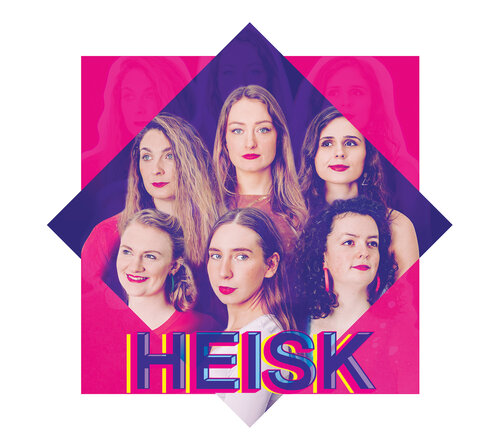 Don’t you just love a band who’re pushing the barriers and striving to create something different, especially at a time when so much seems to be a rehash or just going over the same ground. Heisk began with the worthy intention of adding some spice to the Celtic folk scene, firstly from the point of increasing the input of women but then to mix trad roots with other influences such as soul, funk and groovier pop.

The eponymous album here shows they’ve done that quite smartly, but other factors are at work as the increasing use of electronics through keyboards and harp get to tighten their grip on what’re in essence jigs, airs and reels. Sure these girls can play them as lightly and delicately as tradition always allows but now they’ve tasted the digital/electronic, tracks like ‘Ailsa,’ show technicolour and a dance floor mentality which doesn’t include a strathspey! ‘Charlie’s,’ is another one which shifts and paces around like a prowling tiger before bounding across the room like a whirling dervish on speed. It’s a real wake up call. They’ve even named on track ‘Disco,’ and yes that’s where it heads in attractive and addictive fashion. The intention is all.

Vibrant, danceable and open, Heisk deserve a spin in your CD player you hear?

McNeill & Smith are a North Wales duo who met in 2020 and have recorded quite a collection of albums and EPs in the two years since despite the pandemic. ‘New Strings, Old Guitars,’ is a canny title which reflects their attitudes and aims. Basically shaping, Americana, folk, r’n’b to their own liking. What we’ve got here is a mini album, which signals more than unplugged roots with nods towards Celtic, balladry and rock sneaking into the mix.

Whilst all of that is healthy what it does is inform their growing confidence at writing all their own material, no doubt an ever evolving process as they get used to each other’s approach. The opening ‘Anybody Else But You,’ has a strong blues undertow whilst ‘ Midnight Wildflowers,’ gives off bluegrass country overtones and displays McNeill’s  plaintive vocals to best effect. ‘ Caledonia Again,’ is a reflective, late evening thing which’d be a doozy with a string arrangement, though keyboards do a decent enough job.

Open for all manner of gigs, including house concerts, it’s perhaps smaller clubs and intimate venues which’ll be their real forte live, though I can think of quite a few festivals who’d benefit from their thoughtful muse.