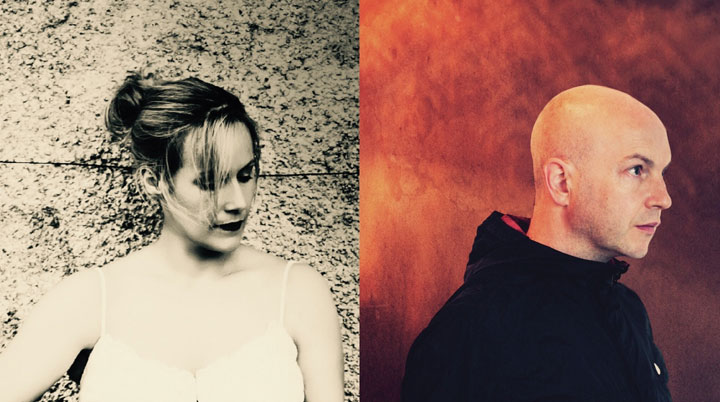 Two of folk music’s most highly-regarded and celebrated musicians, John McCusker and Heidi Talbot celebrate their tenth year as musical partners with the new mini-album, Love Is The Bridge Between Two Hearts, released on 20th April on Under One Sky Records.

This is the first time they’ve collaborated exclusively as a duo and fans can now look forward to an extensive UK and European tour later this year. John has previously produced Heidi’s last three albums and they have both played all over the globe in each other’s live bands.  Between them the husband and wife duo have shared the stage with among others – Paul Weller, Mark Knopfler, Alison Krauss, James Taylor, Teenage Fanclub, Graham Coxon, Eddi Reader, King Creosote, Tim O’Brien and Jerry Douglas.

John McCusker has long been renowned for his sonic adventures, which has earned him many coveted awards over his 27-year music career. John was awarded the coveted BBC Radio 2 Musician of the Year in 2003 and also The Spirit of Scotland Award for music in 1999 and again in 2009. 2016 saw John presented with the Good Tradition Award and perform with his band at the BBC Radio 2 Folk Awards at The Royal Albert Hall.

Known for her beautiful voice, sweet melodies and intricate arrangements, Heidi Talbot first came to prominence as a member of Irish-American female group Cherish the Ladies, before embarking on a successful solo career.   Heidi was the recipient of 2008’s Indie Acoustic award and multiple BBC Radio 2 Folk Award nominations and in 2016 she released her fifth solo album, Here We Go, 1, 2, 3.

Working and recording together on Love Is The Bridge Between Two Hearts has been an organic process, says John: “We’ve never had a big musical plan and we try and do what feels natural to us. Recording an album together seemed completely natural and we’re always striving to keep things as fresh as we can musically. As much for ourselves, as for the audience.”

Love Is The Bridge Between Two Hearts is the culmination of John and Heidi’s shared experiences and a love-letter to the traditional songs that inspired them both while growing up.

“Heidi loves going through the old traditional songbooks. One of the things that excites us most is when you reinterpret a traditional song or find beautiful old words and write a new tune for them. That’s what we’ve tried to do with this record and hopefully create something new and beautiful with them.” adds John, 44.

This deep connection to their musical roots is at the forefront of their new material and it flows throughout. Heidi describes album opener, Sprig of Thyme, as “one of my earliest musical memories is hearing my Mum and Dad playing Foster and Allen’s version of A Bunch of Thyme, it’s one of our favourite folk songs.”

Music plays an essential part of daily life for Heidi and John who live in Scotland with their two young daughters Molly Mae and Jessica.

“Music is such a big part of both our lives and the house is always full of music. The kids think it’s normal and have never known any different. They thought everyone played music and when people would come to the house they’d ask what instrument they played!” says Heidi, 37.

Living and working in this musical environment has not only helped to shape and mould the album, but given it a personal touch.

“We both want our records to sound like friends sitting around playing music and having a lovely time, rather than trying to get it sonically perfect. When we came to make this record, it was the perfect example of that. We’d call our friends and we’re very lucky that they’re very good at playing music!”

Lucky indeed, as the talented artists that feature on Love Is The Bridge Between Two Hearts include names such as Adam Holmes, John Smith, Innes White, Michael McGoldrick and Donald Shaw (Capercaillie) to name but a few.

“The title Love Is The Bridge Between Two Hearts was inspired by the new Queensferry Bridge in Scotland that we go past every day and that got us thinking about how many bridges we cross every day on tour,” says John.

“We loved the idea of bridges bringing people together. Looking at this beautiful new bridge, you start thinking about the traffic going each way and compare it to the music we’re putting across with this mini-album.”

Making music is a way of life for Heidi and John with audiences looking forward to the live experience.

“We’re enjoying the moment and looking forward to the tour. We’re excited about playing the new songs live, but there will also be songs from our solo records and some special guests along the way. We’re taking our girls with us on tour and there’s something really lovely about going off on a new adventure as well.

“Every time you make a record, it’s like a snapshot or musical photograph of where you are at that time in your life. When you listen to Love Is The Bridge Between Two Hearts, this is where we are and the sound of a happy family making music.”