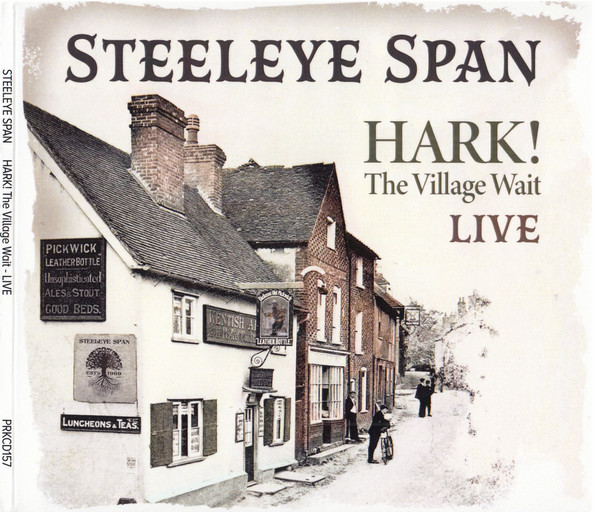 The original ‘Hark! The Village Wait.’ was the product of a time when the mix of electricity and traditional music offered a bright new dawn. Five individuals and a couple of drummers decamped to Sound Techniques in Chelsea to cut an album they’d thought and fought about across Winter 1970 in an old house on Salisbury Plain. Even as they started recording all the band knew it wasn’t to last. Yet for all the disquiet and dissatisfaction leader Ashley Hutchings had drilled his quarrelsome companions well and the album they cut stands as testament to what could have been had that initial disparate version of Steeleye Span held together beyond four, brief months.

In the 21st century Steeleye Span is altogether different. The past they say is another country, Steeleye’s whole reason d’etre modernises British roots, so having decided to revisit their debut, there was no way it would be an exercise in reproduction. Maddy Prior’s sleeve note makes it clear that Span are playing this 2020s and the niavety doesn’t really figure, even if the charm still lingers. Obviously a seven piece band versed in the heavier end of things means some of the acoustic atmospheres and frail sounds you’d get from dulcimer, concertina, mandola and autoharp are less even though Benji Kirkpatrick’s banjo and bouzouki do occupy the same niche. There’s even more contrast since in the intervening years Steeleye’s prominently used the fiddle, back in 1970 the instrument wasn’t in evidence beyond one background snatch.

However, ‘Hark! The Village Wait. Live.’ is an enjoyable romp, recorded on the road in 2017 – locations not revealed- the majority of the songs – no jigs back then, see previous sentence –  those which make the transition with distinction. ‘ The Blackleg Miner,’ still a powerful polemic and biting threat to those who’d break the line, the anger and animosity is underscored by the guitars and rhythm section. ‘The Hills Of Greenmore,’ handled by Benji K chronicles a hunt for hares, rolling and bouncing along on a lilting melody. Maddy’s in fine voice on the songs of lost or bittersweet love. ‘The Blacksmih,’ retains its regret and betrayal, ‘All Things Are Quite Silent’ chronicles the lasting emotional shellshock left by a press gang, whilst ‘The Dark Eyed Sailor,’ is lost, love found and all the more tuneful and melodious for it. However perhaps the most powerful version present is ‘Lowlands Of Holland,’ which lays before the listener an echoing, rocking melee of bouzouki, acoustic guitars, fiddle breaks, spiked lead guitar and solid  groove as Maddy delivers the story of brave, but futile voyages in which death is the certain outcome. Harmonically they’re all on superb form, after all seven voices which blend together as well as these can’t fail to make an impression.

Three bonus tracks flesh out the package, not related to ‘Hark,’ but more than likely from the same gig, a distinctly heavy Velvet Underground ‘When I Was On Horseback,’ and a fast gallop through ‘Marrowbones,’ which succeeds chiefly because they reel and rock with vigour whilst Benji sings the tongue in cheek lyric playfully and with a grin.  Coming in a gatefold cover with a canny variation on an American import version from the 80s which shows a Victorian village high street, the pub signs and notices are replaced by recent Steeleye album covers – neat trick!

Beyond nostalgia, this is a worthy addition to the Steeleye catalogue and therefore your music collection. Y’hear?