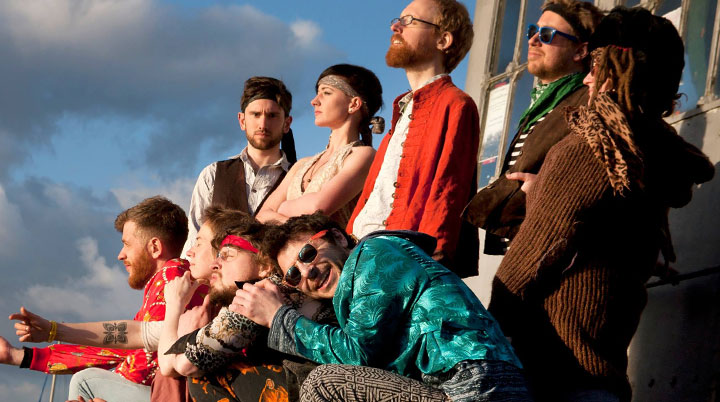 I really try and avoid talking influences, or trotting out that hideous sentence that kicks off with ‘sounds like…’ and ends in a lazy association with some band or other, however…

Any band that considers they should be described as having a melting pot of ideas and influences would do well to listen to Seas of Mirth. These guys went out and got the biggest pot available, melted everything from sea shanties to gypsy swing, chucked in a codpiece from Jethro Tull, squeezed the creative juices of the Moulettes, distilled the humour of the Divine Comedy into it and sprinkled a tuft of hair from the Three Daft Monkeys over the ensuing strange brew. But they weren’t content with that so they melted the bloody pot, and the cooker and the whole house around it.

And I love it. Imagine finding a circus tent and peering in tremulously and seeing wonderful things. Before you can pull away you’re grabbed by a burly hand around your throat and yanked into an absurdly bonkers world of bombast, splendour and musical invention. Seas of Mirth have dished up an amazing Prog-Folk Shanty Fairground experience of an album with Hark! The Headland Approacheth. In less confident hands this material would be an absolute disaster, yet they hold it together and then some.

Now I’ve popped the cork of finding influences I can’t chuffing stop, so here is another – Tubular Bells, yep Mike Oldfield, there was an underlying trippy rhythm to that whole album which has been captured here perfectly. Just listen to ‘Brandywine‘ to hear what I’m on about.

Reading that back it sounds like I was tripping on something pretty powerful (just coffee honest Guv), but that is how the album makes you feel, it’s a trip and a blast from beginning to end, Bellowhead is so last year darling, the new gods are here.