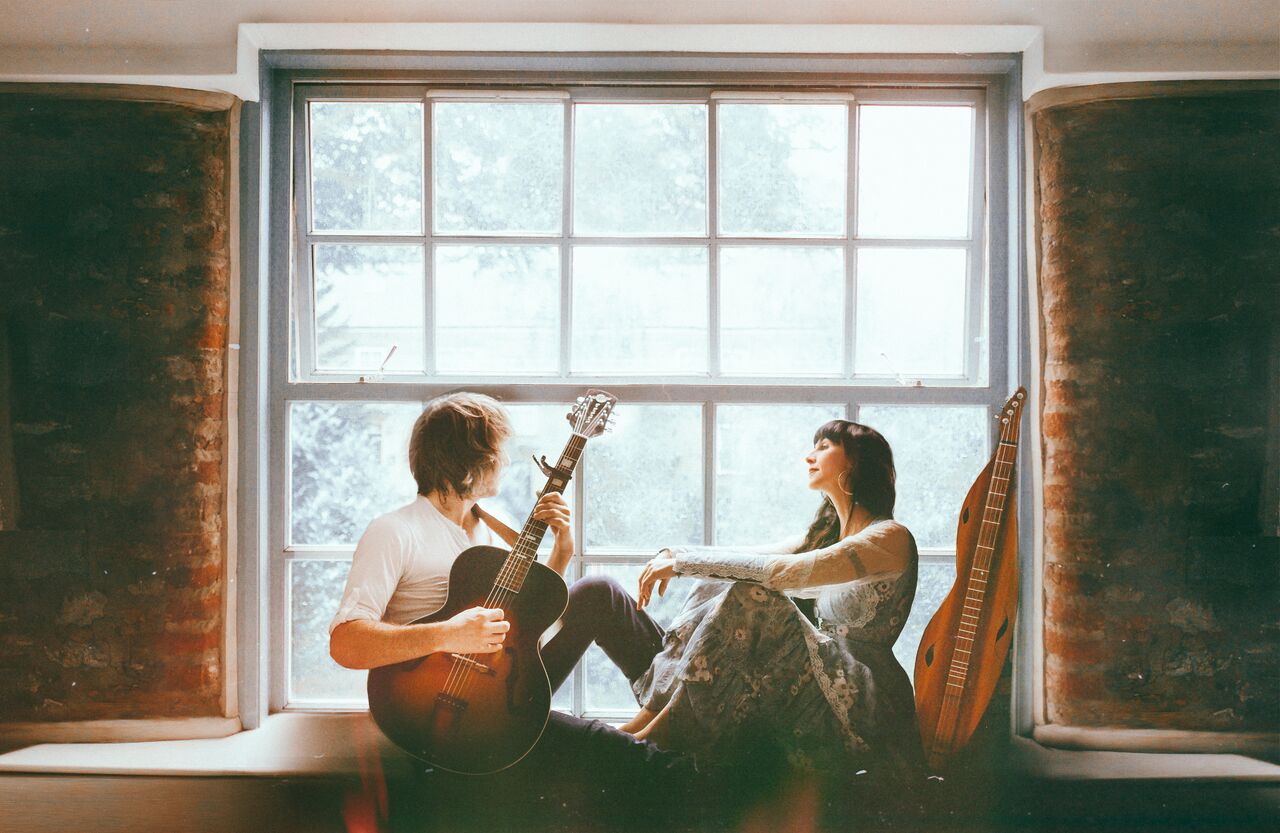 Two years ago, Hannah Sanders & Ben Savage stirred the folk and acoustic world with a stand-out debut album and there’s been little slumbering since. Now they are set to release an arresting second studio album, Awake. The combination of Hannah’s outstandingly pure, clear voice, their perfect fit harmonies and Ben’s exquisite dobro are the rock-solid foundations of this rising duo, first witnessed in the 2016 album, Before The Sun. This quality pairing unarguably has hypnotic effect, painting aural dreamscapes around them in resonant songs that are given room to breathe.

When Hannah’s folk family travels, across Europe and sojourn in America ended and she returned to her native East Anglia, a chance meeting at a Cambridge folk club with The Willows band member Ben was the start of something special. Ben went on to produce Hannah’s solo album Charms Against Sorrow before they ventured into duo territory uncorking a beguiling, intricately woven, ethereal sound all their own. Before the Sun saw them named in many Albums of the Year lists including the 2016 fRoots Critics Poll and hinted at a largely untapped songwriting talent amongst the expertly executed traditional arrangements and covers. That song writing skill moves more centre stage in Awake- an album that shows them fulfilling all the promise heaped on them.

Once again, they have returned to Toronto, putting Grammy-nominated Canadian producer David Travers-Smith (Madison Violet, The Wailin’ Jennys) at the helm for this album crafted with infinite care. The 11-track release has six strong originals alongside innovative arrangements of traditional songs and captivating covers from the Pete Seeger and Woody Guthrie cannons. The eye-catching album cover by psychedelic artist Alan Forbes depicts the High Priestess and a deer as The Hanged Man from the tarot card deck and tarot icons run through the CD booklet. Says Hannah: “We used tarot throughout the recording process to help us think and feel more deeply about the music.” A duo who delve into the mysterious and often like to release music in line with the lunar calendar, their live show sees them huddled around a single microphone, drawing the audience in. And so it is with this magnetic album.

Alongside Hannah’s trademark mountain dulcimer and Ben’s delicious dobro, they both play guitars on the album. Adding their magic are guest musicians from both sides of the Atlantic – from the UK Jon Thorne on double bass, Evan Carson on percussion and Norwich singer songwriter Jess Morgan, Katriona Gilmore and Jamie Roberts on additional vocals and from Canada Chris Coole on banjo, David Travers-Smith on horns and organ, Burke Carroll on pedal steel and on vocals, Vancouver-born American-Canadian alt country singer songwriter Suzanne Ungerleider who performs under the name Oh Susanna.

Entwined in the sturdy roots of English and North American music, Awake stirs with two original Sanders/Savage numbers – the mythical sea woman yearns to return to her spiritual sea home in the banjo-laced Selkie Song and there is more heartache in I Met a Man, a modern retelling of the ancient story of love between a woman and a green man, with Burke Carroll weaving in his wonderful pedal steel.

The original material continues in A Thousand New Moons – a luminous, gossamer-spun reflection on endings and beginnings, with Ben on lead vocal. The symbolic number 7 is the title of a song Hannah wrote for those who search for omens in the natural world, prompted by a friend desperate for a life change. The haunting instrumentation adds pedal steel and horns to Hannah and Ben’s guitar duet and the popular ‘One for Sorrow’ magpie nursery rhyme provides the chorus. The beautiful title track was originally written by Ben to tempt a talented friend out of a musical hiatus but has taken on a wider meaning and here it enjoys a lush vocal crescendo with the duo joined by Jess Morgan and Oh Susanna. Reaching is an exquisite, mellow, pin-drop perfect love song written by Hannah which closes the album in this duo’s soft tread style, building to a flourish which unusually features Ben on drums.

Awake is an album that stirs the soul and further endorses the empathetic class act that is Sanders and Savage.

“Spellbinding… Hannah and Ben were born to play and sing together.”  – fRoots Magazine

Released on May 11 on the Sungrazing Records label it will be distributed by Proper Distribution.

Catch them live on the following dates throughout the year:

17th May The Musician, LEICESTER

19th May The Hive, SHREWSBURY

20th May The Cut, HALESWORTH