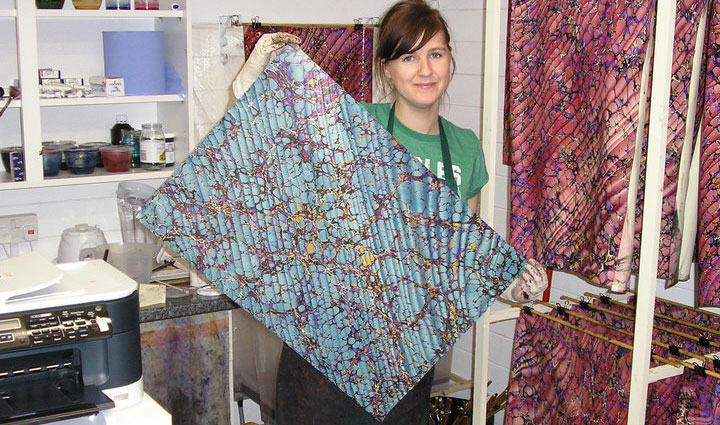 Can you give us an idea of the history of marbling related to books. Have there been fashions in marbling over the years and do you get asked to match historical patterns?

Though these days marbled papers have a diverse usage traditionally they were used within the process of bookbinding.

The first recorded use in the western world was in Turkey around 1540. The secrets of the Turkish marblers made their way to Britain by the late 18th century where they became a popular covering material for book covers and endpapers. The marbling of the edges was also a European adaptation of the art of marbling and is still carried out today for very special projects. Patterns can be specific to certain periods in history as well as the country of origin, for example the ‘Italian Vein’ or the Spanish Ripple’.

We regularly get asked to match historical patterns, and this is mostly working with bookbinders who are repairing antiquarian bindings, where the original endpapers may be too damaged to re-use.

Has the process or materials changed over time?

The process has changed very little over hundreds of years, the way I marble now and the set-up of my studio is very similar to an 18th century marbling studio.

Supplying marbled paper for endpapers must be a straight forward process compared to page edges, did you have to become a mini production line?

When working on large orders of the same pattern we often end up with a production line, aluming, marbling and then washing the sheets down afterwards. It does become more complex when marbling the edges and we are restricted to how many ‘blocks’ we can marble in a day. Each book-block needs to be tightly clamped between two pieces of aluminium, we add the paint to the marbling tray in the usual way, then lightly dip each block to the surface of the ‘size’ – the book-blocks must then be kept in their clamps until fully dry to stop the paint seeping into the pages.

Where did marbling sit in the production process of this Folio Society hand bound book?

The production of the hand marbled papers for endpapers would have been one of the earliest processes – once we send them to the binder they add the endpapers and then the sewn bookblocks, end papered with our marbled sheets get returned to us, so than we can marble the edges. 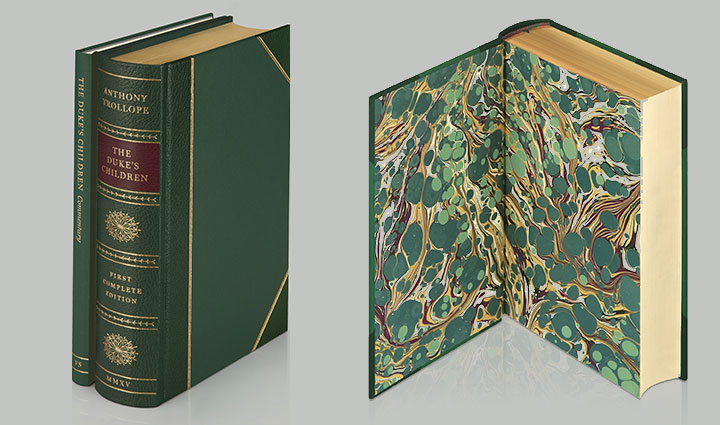 How did you become involved in this particular project?

We have worked with The Folio society for several years, producing special papers for many of their special edition bindings. They approached us to design a paper specially for The Dukes Children based on their brief and to fit in with the colours of the binding.

These endpapers are for the first complete edition of The Duke’s Children by Anthony Trollope.

Anthony Trollope (1815 – 1882) was a giant in Victorian literature who across forty seven novels encapsulated the Victorian world in his fictionalised lives of the landed gentry and political classes. Strangely one of his best known novels, The Duke’s Children, has never been available in the form he originally wrote it. Forced to excise nearly a quarter of the book at the behest of his publishers it has never been available as Trollope wrote it. Until now that is with the Folio Society edition of the full manuscript as Trollope envisioned.