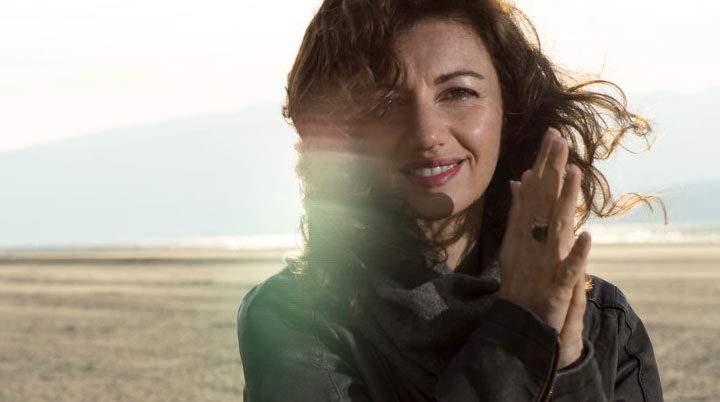 Sometimes an album happens along which takes its time in persuading you of its charms and subtleties, there is nothing up front or anything which hits you smack between the eyes, rather its warmth washes over you in waves. In the end you wonder why the allure avoided you on initial hearing. Such a creation is Tro. Gwyneth Glyn in some ways resembles her album an understated, refined musician, a name you’ll have registered here and there, part of different groups, working with collectives and putting out CDs way under the radar; then suddenly there she is with Tro, shimmering quietly.

In terms of Welsh culture/music Glyn is everywhere, she ranges freely over styles and formats, actress, poet, script writer for Pobol Y Cwm the long running Welsh soap, serial collaborator especially with world musicians, cultural ambassador across the USA and more recently composing librettos. How’s that for varied?  Actually her fourth release Tro breaks barriers in subtle ways, like her use of Senegalese kora player Seckou Keita alongside the more predictible stack of Welsh trad cavaliers, Dylan Fowler and Patrick Rimes to name but two. All are put to shrewd task, Keita being a case in point, his kora plays trimly on the Welsh Trafaeliais Y Byd and then even more appropriately on the African Kide-magni, a track where Wales truly blends in with international intentions. But then the whole album is a catch all of delights, Y Gnawas, is really a cheeky  lift from the USA where it’s properly titled Katie Cruel, whilst elsewhere Ffair translates She Moves Through The Fair into rich Walian prose, Glyn’s voice almost cooing the lyric in passionate and sad tone.  It’s truly hard to find a track which falls below quality, sure I have favourites but at a healthy thirteen, there isn’t one which I can’t recall instantly and not smile about.

Nor is our heroine afraid to dip into the dreaded English, with Dig Me A Hole, perhaps the most oblique and left field offering and the shiveringly effective Far Ago which is seemingly based on an old quote of Joni Mitchell’s applied to a situation closer to home. Is there anything she doesn’t do with poise and style? She’ll make a Welsh, death metal, funk album next and it’ll be belter! No don’t bet on it, but do rush out and source yourself a copy of Tro, on the new Bendigedig label, a partnership between long time global record company Arc Music and Theatr Mwldan in Cardigan. Neat and sympathetic production by the aforementioned Dylan Fowler should not be overlooked, but the real joy is that Gwyneth Glyn has crafted an album with a national identity that reaches out to the wider world in such a delightful yet perceptive way.