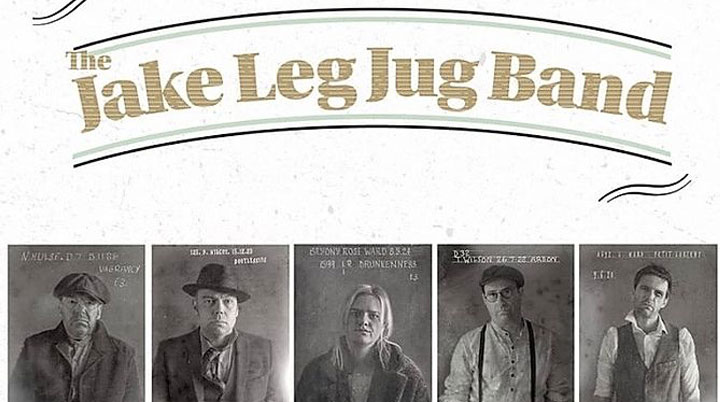 One look at the dishevelled individuals in the mugshots on the front brings to mind Horslips ‘Aliens,’ LP cover, but unlike the Irish Celtic rock wizards there’s something spooked and hard bitten about the JLJB. It’s like they’ve been on a three day bender around the Irish bars of Chicago, they’ll regret it all in the morning, prohibition is coming and alcohol is off the agenda for the best part of thirteen years. Ever wondered why our transatlantic cousins drink such weak beer? Check your history… or you could just listen to this CD instead.

When The Queensberry Rules split up Duncan Wilcox was the one with a solid plan; play the music of blues vintage years as authentically as possible given he was from North Staffordshire. The Jake Leg Jug Band has been a revolving door of faces, perhaps the best way to maintain the freshness and intimacy that such an outfit needs is to be an umbrella rather than a fixed line up. Hence this celebration (surely not the right word,) of a century of years since barrels ran dry officially across the US of A, is just about the most ambitious thing they’ve presented yet. Given the block of former personnel and guests which is listed on the back, count amongst them fiddler Ciaran Algar and Nick Barber from Cajun rockers Elvis Fontenot, who mix strings, keyboard and brass then the sounds far funkier, soulful and earthier, the title track is a lurch around riot of blues and old timey marking the fact America turned off the taps.

Balancing the serious tone with a core of humour, they tip the hat to illegal backwoods stills, ‘Kentucky Bootleggers,’ question the role of religion, ‘Every Day’ll Be Sunday When The Town Goes Dry,’ and celebrate the ability to escape ‘I’ll See You In C-U-B-A.’ Then there’s the protest ‘Prohibition Blues,’ ‘The Alcoholic Blues,’ the facts stark, convincing if not in your face. Of course in reality prohibition didn’t succeed and pretty soon bars and booze were back. The fact that JLJB pull this off with such aplomb is down to determination and knowing their material. From relatively new vocalist Bryony Rose to Toby Wilson’s dobro, Neil Hulse’s guitar and Liam Ward’s harmonica/jug they mesh together like a well-oiled machine, and I don’t mean well-oiled as in drunken, I mean this troupe can play. Cutting to the chase as I’m running out of room, read and understand they’ve upped to fourth gear and should increase speed as a result. What did the KLF say ‘better not stop us ‘cause we’re comin’ through’? That was The Justified Ancients Of Mumu, equally it’s The Jake Leg Jug Band as well. Smokin’!