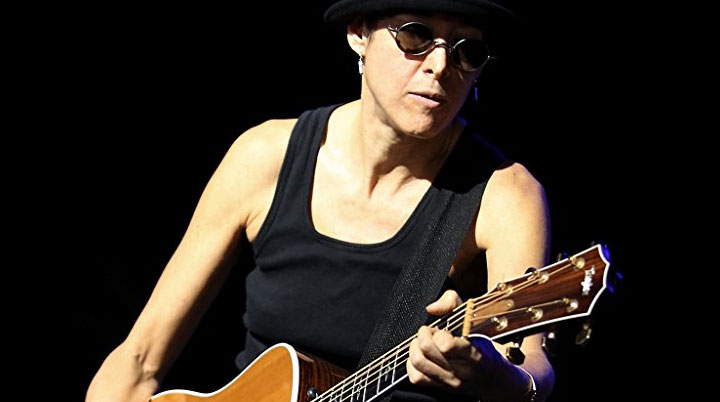 Following up her Edinburgh Fringe run by performing tracks from her three albums Short, Sharp, Shocked, Captain Swing, and Arkansas Traveler Michelle Shocked is returning to the UK with her Mercury Rising Tour.

Seminal songwriter, activist, firebrand, punk, anarcho-feminist Michelle follows up her 2017 Edinburgh Fringe Festival Truth vs Reality show by returning to the UK for a full tour, celebrating her roots as a fiercely independent artist, and her celebrated Mercury Trilogy.

Michelle first released the trilogy through Mercury Records in the US, earning Grammy nominations for Short, Sharp, Shocked (1988) and Arkansas Traveler (1992). However, angered by Mercury’s refusal to promote her albums, she sued the label, won, and took control of her back catalogue, retaining all her masters and re-releasing the trilogy through her own label — Mighty Sound. In a musical landscape where more and more artists from all genres are adopting a spirit of independence and DIY, Michelle Shocked was ahead of the curve by at least a decade.

First discovered after a bootleg cassette of her performing around campfires at the legendary Kerrville Folk Festival was released unofficially in the UK in the 1980s, Shocked has gone on to play huge concert halls and acclaimed festivals around the world. Here, she is going back to her roots, playing small, intimate venues and combining tracks from her sizeable back catalogue with stories from the road, and a few surprises thrown in.

Michelle Shocked:
“From a Texas campfire to London cabaret.. I daresay that’s not as daring a leap as moving my mooring from Tottenham to Kingston on Thames when I lived on a narrowboat in the late 80’s. I’ve followed my muse to memorable places; Queen Elizabeth Hall was my first pro gig in London and my glass slipper still fits. Zedel’s is a world-class performance destination and the perfect base to launch my UK tour. It’s a place for grown ups, and I am definitely a grown-ass woman. And, let’s be honest, American cabaret can’t handle me.”

This tour sees her returning to intimate venues, where she’ll be talking about her career in between playing the records in full, with some special guests lined up too.