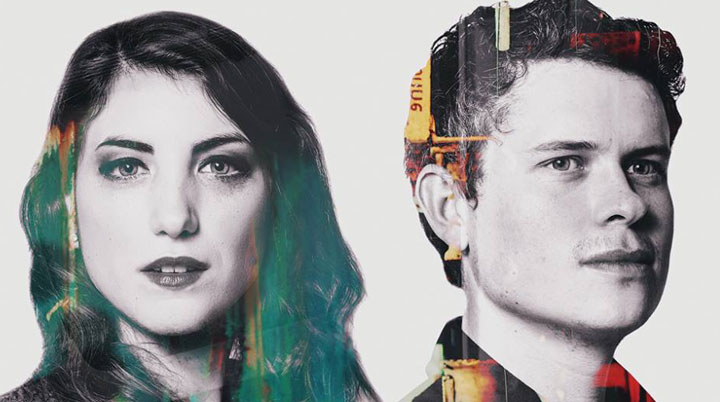 Not prepared to miss acclaimed three time BBC folk award nominees Gilmore & Roberts, I headed to see them in action at Komedia in Brighton on Thursday 13th October. This date was the 9th their 21 gig tour, celebrating their first decade of performing together.

Music aside, what’s great about this duo is their relaxed, banter-laden stage presence – watching them perform is a bit like spending time with a good old friend. However, the real joy of this gig was that it gave the audience a chance to truly revel in the fantastic songs, old and new, of Katriona Gilmore & Jamie Roberts over the last ten years.

Even I hadn’t fully grasped how many stonkers they’ve written over the past decade; opening with ‘Dr James’, Gilmore’s song inspired by the true story of a Victorian doctor with a sensational secret (Gilmore is one of the best female songwriters on the folk scene and this one is really up there). Jamie Roberts’ ‘The Stealing Arm’ followed, the tale of a transplanted arm with ideas of its own.  Just like that, we were on to a brilliant evening.

Taking a request from the teddy bear of an audience member (something I’ve never before experienced at a gig) for Gilmore’s supernatural ballad ‘Fleetwood Fair’, Roberts, who appears to be doing a great line these days in writing songs to break your heart into tiny pieces, introduced ‘Selfish Man’ from their newest album Conflict Tourism, the song of a lifelong motorbike racer realising his career has come at a cost to his loved ones. They finished the first half with the album’s final track, a fantastic unplugged rendition of Gilmore’s ‘Ghost of a Ring’.

The second half kicked off with ‘Letters’ a song written by Gilmore, inspired by her Danish great-grandmother, separated from her young song by war. ‘Billy Green’, Roberts’ song about a real life soldier praying on the eve of battle for the most beloved member of his platoon to be saved, was for me the pinnacle of the evening – it’s a song every self-respecting folkie needs in their top 10. Other highlights included new tracks from Conflict Tourism, a pretty cracking album by all accounts, the fast-paced ‘Peggy Airey’ and ‘Jack O’Lantern’.

I’ve been trying to work out just what makes Gilmore & Roberts so unique. I think the secret is that together, they achieve this through a perfect partnership. Exemplary song writers, their creative contribution seems to be split equally down the line whatever they do – Gilmore with a wonderful sparky toughness and a voice to match, her fiddle and mandolin sweet and sharp; Roberts gentler with a mellifluous voice and the guitar to match.

What they share is a wry, humorous, slightly wicked streak, packing a punch whether they’re expressing anger at an injustice, sorrow at a sadness or glee at someone or something sticking two fingers up to the establishment. Perhaps that sort of meeting of minds is what keeps it so enduringly fresh and fun for ten wonderful years.

I look forward to discussing this with the teddy bear at the 20 year tour.