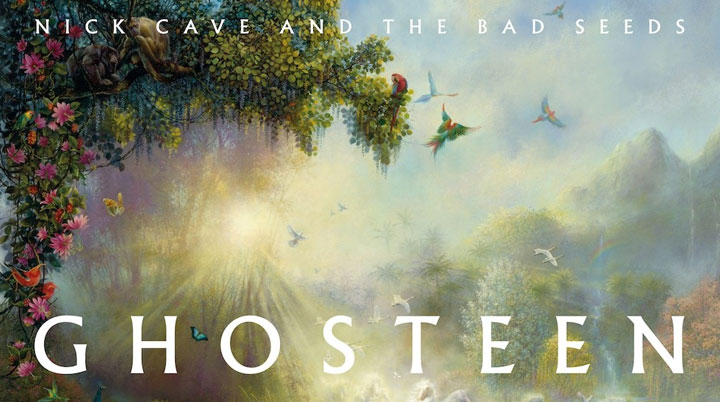 Well that came out of nowhere, Cave casually let drop the fact that the 17th Bad Seeds album would be released just a few days prior. No grand announcement, just a reply to a fan on his website. And it is so refreshing to actually be surprised, we so easily forget the thrill of discovery in an endlessly connected world. There unalloyed joy of something beautiful coming out of the blue, especially when the current trend with new albums is a long lead up to release, dropping tracks every so often as little teasers. By the time the release day actually comes around it already feels somehow out of date, the remaining tracks filling the final holes in an overly familiar jigsaw.

So huge respect to Nick Cave for going against the flow, not that he has ever been one to take the predictable or safe route anywhere.

Where does Ghosteen sit within the oeuvre of Cave and the Bad Seeds? The initial realisation is that we shouldn’t draw arbitrary divisions between Cave’s output as part of the Bad Seeds and his soundtrack work with Warren Ellis. That duo has created soundscapes for around a dozen movies, rounded pieces of work in their own right. Whilst most modern soundtracks are virtually unlistenable detached from the movie, Cave and Ellis have created some beautiful music – check out The Assassination of Jesse James by the Coward Robert Ford, or The Proposition – both essential albums in my estimation. That emotional storytelling through music is one of the pillars of Ghosteen.

This is a deep and affecting album, measured and delicate in its delivery. It continues the feel of Push The Sky Away whilst deepening the emotional clout, however there is a soulful optimism at the heart of this work. You can’t help but draw parallels with David Bowie in the way his art is intrinsic to what makes him tick as a human being. As in all great art, the feeling that absolutely everything is here, the answer to any question you have ever had, the solution to every worry, you just have to pause and let it wash over you. Biblical allusions and metaphors have haunted cave’s songs for decades, they are still present here but in a more arcadian form. The message that comes over is that we have to strive to find peace in the here and now, for ultimately there are no gods, just each other.

As an artist he has found a tranquil place, the belligerent and bellicose spirit that held sway over some of his past work has either left the party or been absorbed into the whole. It is impossible to ignore the huge impact that the loss of his son in 2015 had upon him as a person and as an artist, he stated himself that he had to relearn how to write songs. Every lyric penned since that dreadful day has been pulled apart and analysed by fans looking for insight and enlightenment. But lyrics can be whatever we want them to mean, many found Skeleton Tree to be a cathartic outpouring of his grief, despite Cave stating that most had been written before the loss of his son.

Indeed, Cave said soon after his loss that ‘the rush of emotion it unleashed in people and the way they wrote about their own sadnesses and their own griefs was monumental and amazingly helpful for me and my family’. There came a sea change in how he related to his audience, a spoken word tour engaging directly with the audiences questions, so what better way to announce a new album than in a personal response to a fans question on his website?

So it is an album full of life, the losses, joys, successes and failures that we all experience. The human experience in all its glorious hues.