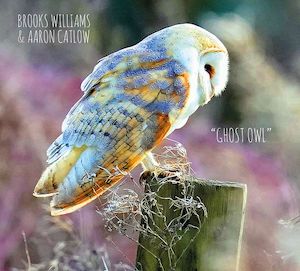 Having been asked by environmentalist film guru Simon Hurwitz to soundtrack a couple of his short films, singer guitarist and all round good guy, Brooks Williams it seems didn’t know when to stop. Opportune as it was what with a pandemic to sit at home and knock out a few instrumentals the subject which really fascinated Williams was the Barn Owl. So, next thing you know there’s a whole album project, inviting West Country fiddler Aaron Catlow, a former Afro Celt,  along for the ride turned out to be good fortune, his violin and Williams guitar fit like a glove around a series of tracks which cover a huge percentage of Barn Owl ecology, adaptation, behaviour and habitat.

The cover shots are gorgeous and the melodies echo different facets and styles of folk from both sides of the Atlantic as you might expect since Brooks Williams is from Georgia if now based in Cambridge, there are even hints at a raga about ‘ Hootlet,’ as well.

Whilst it may not be what we regularly expect from either of these two, the album stands as a fascinating listen and an absorbing side line which’ll have you seeing Barn Owls every time you close your eyes. And that is no bad thing, they are after all mesmerising creatures which we should all appreciate and protect.