Get Out Of My father’s Car! – Gryphon. 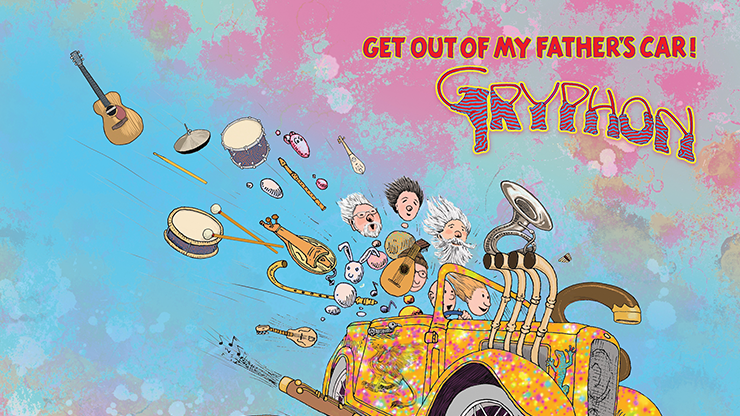 If ever there was a bunch of esoteric individualists it’s Gryphon. They’ve always been endearingly bonkers, even when they were trying to be serious. It was a trait that meeting with any of them revealed. There was always that twinkle in the eye and a laugh which told you there were no starched collars within sight. Maybe that was the clever part about it, whilst the band had a whale of a time they were/are excellent musicians capable of playing… well…anything.

Since the departure of founder and all round keyboard/recorder genius Richard Harvey, the good ship has sailed on releasing first ‘Reinvention,’ – the title gave much away – and now the equally curious ‘Get Out Of My Father’s Car!’  I say curious and mean it in a good way, because you just never know what to expect next and that’s healthy.

From the light tone of the booklet notes, “Krum Dancing: Oh no (I hear you flinch,) not another shameless pun. Well yes, I’m afraid so,” to bassoon master Brian Gulland’s hypnotic, colourful tunic and trousers, I can never decide if he’s a hermit from a mountain cave or Gandalf’s younger brother who lives in a castle in the forest, this whole venture puts a smile on your face. The others are sporting extra bright colours too on the band photo, not quite as fantastic as Brian, but guitarist Graeme Taylor’s natty purple shirt is getting there. And all this before the music, speaking of which it’s about time I mentioned it. (Yes, get on with it, stop rambling! Editor.)

As inevitably happens in a band of Gryphon’s long tenure, there have been changes in personnel; along for this jaunt are new bassist Rob Levy and the fiddle/vocal of Clare Taylor, as well as a couple of errant saxophones which gives them new textures, material and opportunities to expand and improvise.

Writing together and apart they cover some ground with the opening title piece, a tuneful helter skelter which takes in courtly strains, soul grooves and brass before the roared ending which recalls an early jape pulled by the group in 1972. Andy Findon brings examples of his late brother’s modern classical repertoire in ‘A Bit of Music By Me,’ and ‘Suite For ’68,’ both feather light with hints in places of their debut album through drifting guitar lines and wandering bassoon passages.

Clare Taylor’s most effective work comes with her ‘A Stranger Kiss,’ inspired by no less than Shakespeare’s ‘Hamlet,’ whilst the afore mentioned ‘Krum Dancing,’ is in fact four freshly written renaissance dance tunes which remind you that back in the day Gryphon were masters of medieval rock and still are.

Pick of the bunch though is ‘Parting Shot,’ repurposed by Graeme Taylor from an old Home Service tune, it’s a gentle lyric sung splendidly by Dave Oberle over a George Martin type arrangement and sums up all that’s great about the band. An excellent way to close out the album, reference ‘Major Disaster, which completed ‘Treason,’ in similar fashion four decades earlier.

Current difficulties not-withstanding, Gryphon must be itching to get weaving and play this material live. When they do it’ll be quite something to see and hear. Out there for sure but go with them, it’s a journey you’ll never regret.