From the Storm- The Blue Pig Orchestra 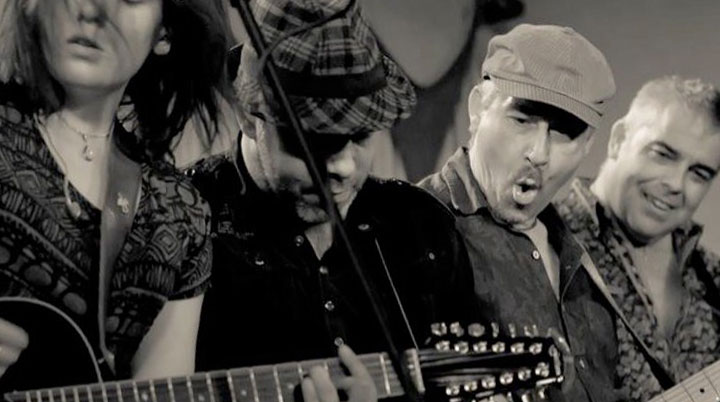 Fylde-centric and proud of it, the Blue Pigs play the strip between Blackpool, Fleetwood and Thornton-Cleveleys, eternally bound to the Lancashire coast. Since last summer they’ve featured the talents of mega fiddler Richard Curran. From The Storm is their second recorded work and conjures an agreeable, friendly roots rock sound which takes contributions from both sides of the Atlantic, but hangs its hat on neither peg.

The fact that they’ve played bars, clubs and hostelries galore comes as no shock, they’re well versed in stomp along, toe tapping rousing numbers which invite a rowdy, noisy and fun response. I doubt they’re the sort of band you can ignore once they achieve full steam.

However, don’t then write them off as just another group with whom to party hearty, what they’ve done here is consider what they should be writing about and to dig deep in their own backyard for inspiration. Right on the button then Kilgrimol is a reflection of a legendary local village which got drowned beneath the waves with its spectral residents, hollow sounding church bells and all. Santa Ana is the rollicking take on another historical perspective when a Spanish ship runs aground on the shore and somehow ends up rescuing a bunch of roundheads who’d got in bother with Lancastrian cavaliers. Still, if you want a good time item look no further than Sleeping In The Gutter which is about just that- and the effects of too much booze – as if you’ve never been there yourself, have you?

At a mere six tracks, apparently the physical CD sold like hot cakes so perhaps a download copy might be more easy to obtain, but here’s the evidence that TBPO deserve a higher profile beyond the banks of the river Wyre.