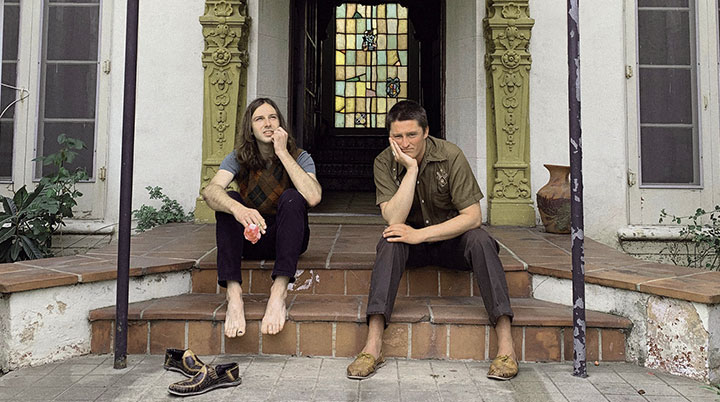 With a viral pandemic making for darker times; more than ever, we need some sunny music entering the 2020 frame. Coming to our rescue are Mapache with their second album, ‘From Liberty Street’. It’s their first for the Yep Roc label who were quick to pick up on them after the release of their lavishly praised album debut. Taking their name from the Spanish word for a raccoon, Mapache are a duo consisting of Clay Finch and Sam Blasucci who as they grew up together sharing the same influences in Glendale, California.

That mix of Californian and Mexican influences shines across this new record but is most obvious in their decision to include three songs sung in Spanish amongst the 14 tracks. As soon as the record starts off with ‘Life On Fire’, it rolls as smoothly as the waves across one of those Californian beaches and you know that you’re in for a smooth ride. A rippling guitar hook and duetting vocals to boot makes for perfection on this opening track.

Their vocals have been compared to The Everly Brothers and it’s easy to see why on ‘Read Between The Lines’ and many of the other tracks, even though the latter weren’t known for their Spanish lyrics or, indeed, the cowboy whistling that pops up on ‘Me Voy Pal Pueblo’. There are more cowboy influences and delightful harmonising to be found on ‘Coyote’ where the lyrics are there to simply paint pictures for you. Don’t expect complex layers of understanding in their words which are there to help create the wistful atmosphere. Think top class singing around the campfire as the sun goes down.

Mostly, as with ‘Cowboy’, the backing is gentle but made sophisticated by the jazz tones arriving with the accompanying musicians whether when simply adding bass and drums to the acoustic guitars or the pedal steel that you’ll find on ‘Liberty Street Blues’.

If you like harmonising duos, Mapache have arrived with the vocals to do the job and a penchant for simple pop tunes that echo the 60s and are heard through a Gram Parsons’ Cosmic American music filter. Add a slice of lime and a dash of tequila to give it some Mexican flavour and, all in all, it’s doubtful that you’ll find a mellower record this summer.