Neighbours & Sisters – Bird In The Belly 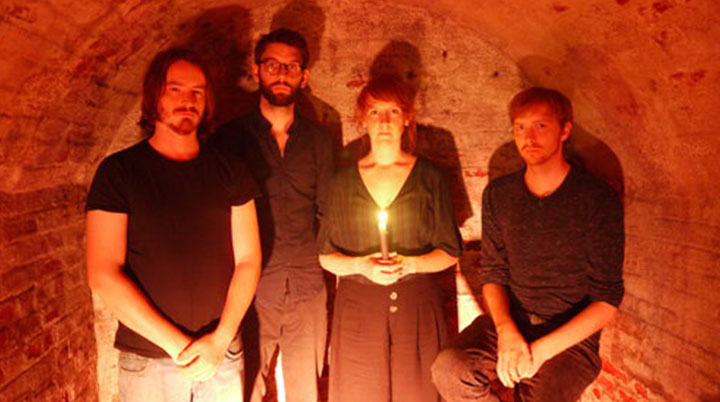 A weird name which reflects the fact that the sound here is other worldly, a dream after a fashion, Bird In The Belly reshape and craft alternate versions of trad folk, doggerel and lore producing a haunted selection which has quite an impact. Imagine Comus stirred with Steeleye Mark 2, some of Kate Bush’s fantasy and Lankum. Er… maybe…maybe not… you get the drift, this is pretty individual stuff.

Four strong, basically duo Adam Ronchetti and Laura Ward, alt folkie Ben Webb which leaves Tom Pryor to play the instrumentalist, the melodies and rhythms are used to frame, drive and add impact, the vocals might give you pause, Ward’s easy on the ear, Webb however is raw, rough edged and sombre. Debut ‘The Crowing,’ earned the dubious honour of being the Daily Express folk album of 2018 and this new offering continues in the same dark, bleak slipstream with tracks which reference the tradition as well as their own song craft. Expect then to find prostitution, hanging, misfortune, dodgy sexual practise and lots allegories for death or dying, among the core issues. Extracting source material from folk song collections or archives has meant that giving each an individual twist or

interpretation can mean they’re twice as relevant as any straight down the line versions, they’re also more personal to the band, hence many of the tracks have new titles. BITB operating as they do with a similar idea to Horslips in that they use traditional material to fashion something contemporary thus ensuring the old informs the new.

What you may well ask is the best on offer? Well before I commit myself, that depends because there is much to admire here and no one track satisfies everything, listen carefully and allow time for the album to sink in, there is nothing instant; in fact if you expect that you do the record a disservice. However I’m fond of Laura Ward’s ‘Bees,’ the poor insects are in such an unfortunate state presently it’s good to hear someone sticking up for them, ‘The Kissing Lasses Of Yarmouth,’ oozes with significance and consequence considering modern cases of child slavery foot down full on the drama pedal. Strong stuff then but an offering you should not ignore, singular and idiosyncratic for certain.