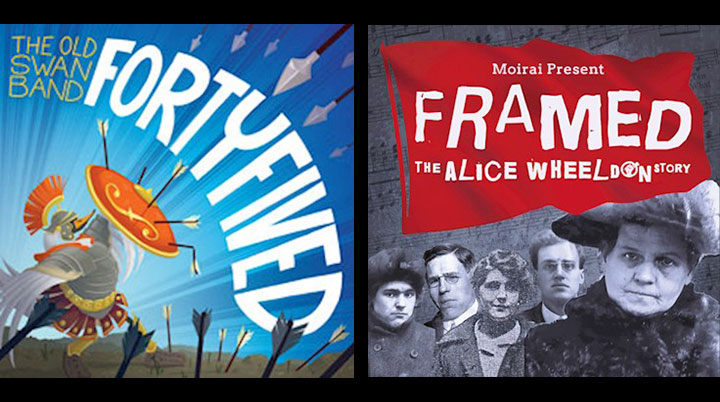 The common link here is the excellent Jo Freya, membership of both bands, one rather scholarly, the other downright fun. Scholarly first… Moirai, three great ladies, the afore mentioned Jo Freya, Derby fiddler Sarah Matthews and from ceilidh rockers All Blacked Up, Melanie Briggs. Fascinated by the tale of Alice Wheeldon and her family, strong, leftish and socialist thinkers who objected to WW1, who were the victims of a trumped up accusation they were out to murder David Lloyd George, there was a show trial…I won’t give too much away, the trio weave a sympathetic storyline with songs they’ve adapted or composed the heavier aspects leavened by instrumentals cannily lodged in between. Picking ‘ I Didn’t raise My Boy To Be A Soldier,’ was canny as the old anti-war song sets the scene for what follows, most of it done in style and sounding quite authentic, and speaking of the ring of truth ‘ What Am I In Here For?’ sets Wheeldon’s own musings to melody and presages the forlorn outcome. If you like your roots with a direct historical drip feed then this well constructed and produced article is right up your street.

The Old Swan Band are still out there cramming dance floors and bursting braces just as they have done since 1970 when the Stradlings founded the group and caused eyebrows to raise and tongues to wag as they loosened the corsets of staid English dance by adding saxophones and drums, thereby making a glorious racket and inspiring a new generation of bands who followed suit adding any manner of unfamiliar elements and instruments. They’ve a line up steeped in Englishness, Freya and Martin Brinsford, John Adams, Fri Fraser, Paul Burgess, familiar names all, adding in newer recruits, Flos Headford, Neil Gledhill and Heather Horsley ‘Fortyfived,’ yes it does refer to their longevity, is yet another varied compilation of tunes to make you get off your rear and scoot round the floor of your local village hall/festival/kitchen take your pick! That same glorious cavalier attitude and merry commotion lead a hullabaloo which opens with some magnificent playing ‘Kings of Kerry,’ and is wise enough in these days of fusion and creativity have wandered widely picking what sounds right and ignoring convention. Once criticised for playing tunes too slow, which actually lead to more people trying the dances for themselves, the signature, bravura has itself become the expected and the Old Swans still pack them in and pack a punch. Great to know.