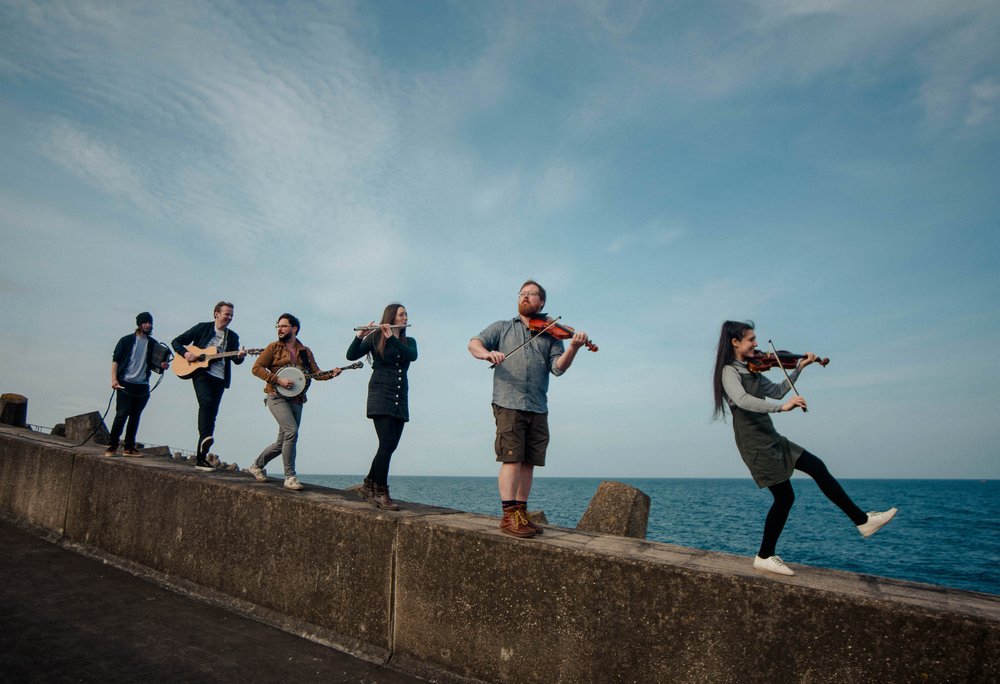 Edinburgh based Yoko Pwno have a brand new album out in April both to entertain and bewitch their audience. ‘ Part Machine,’ is out on Skye Records run by ex Peatbog Faeries drummer Iain Copeland, a label that always issues edgy, exciting music which pushes the accepted boundaries of folk towards places you wouldn’t think it could go. That sums up the adventurous and pioneering sounds made by Yoko Pwno.

Their record company’s thrilled saying, “The album was recorded remotely by the band members over 2 years, with work taking place in locations from Edinburgh to the Orkneys via the small Norwegian island of Fedje and of course the Isle Of Skye. ‘Part Machine’ explores subjects from reliance on technology and psychiatric meds to burned-out Hollywood stars, ground-breaking female swimmers, and bars in Leith, Edinburgh and New Orleans.
Musically, the band take their Trad music leanings to a new level without losing any of the irreverent genre mashing and dance music flavours that characterised their debut album ‘Artefacts’. Yoko Pwno’s twisted, irreverent take on Scottish folk music brings joyful, louder-than-life energy to the party whenever they play. Formed in Edinburgh in 2013, the band performed at raves in the caverns beneath the city’s historic Old Town before graduating to a residency at legendary venue Studio 24, opening for world famous trad acts like Shooglenifty and The Treacherous Orchestra.”

The band themselves equally as effuse, “After 2+ years of enforced downtime, we make our grand return to live music with a new line-up and a new album! Our brand-new album ‘Part Machine’ is released on April 8th, and we’re inviting you to celebrate with us in Glasgow on April 15th at Room 2 and at the Mash House on April 23rd in our hometown of Edinburgh. Support comes from Edinburgh electronic artist/singer-songwriter Iona Z, and beat poetry/experimental group Acolyte!It goes without saying, but we’re beyond excited to play this music for you all. Let’s have a great, safe, but above all fun time.”

Further details and tickets for the launch gigs from the band’s site yokopwno.co.uk