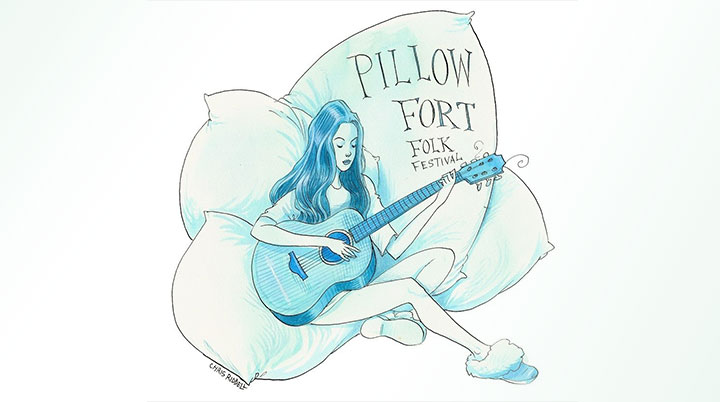 Folkroom’s Pillow Fort Folk Festival – an afternoon of live music taking place on June 6th. As the prospect of meeting friends at a gig again soon seems far away, Pillow Fort Folk Festival will bring musicians and fans closer together for a magical day streamed absolutely live from some of the folk scene’s finest musicians’ own pillow forts, all accompanied by renowned author and artist Chris Riddell’s exquisite live-drawn illustrations.

It will be free to stream, with any donations split between the artists involved and food poverty charity The Trussell Trust.

The line-up boasts a wealth of folk talent, headlined by Mercury Prize nominated musician Sam Lee. From BBC Folk Award winners Edgelarks, Ewan McLennan and Ben Walker to some of the country’s best new songwriters including Kirsty Merryn, Hickory Signals and Kate Stapley, the festival explores the breadth of the folk world. We’ll enjoy music from AJIMAL and Native Harrow, as well as tall tales from comedian The Story Beast. Fiddle sensation Gaelynn Lea and acclaimed singer-songwriters Brooke Annibale and Anna Ash will be performing live from their own pillow forts in America. Every song will be performed alongside live illustrations from former Children’s laureate and Observer political cartoonist Chris Riddell.

Festival organiser, Folkroom’s Stephen Rötzsch Thomas says: “We know it’s going to be a long time before the folk music scene can feel anything like normal again. We’ve all been missing the unique connection and joy that live music brings but it’s still not safe to be together at the moment. We’re hoping this will give everyone an opportunity to feel together in spirit even if we must stay physically apart. Some online festivals are pre-recorded, but we’ll be doing it entirely live. We’re hoping that music lovers will join us from their own pillow forts, and be involved throughout the afternoon. These are tough times for many; thousands of people out there are struggling to feed their families. This festival is our way of having a little fun and, hopefully, doing a little good.”

Folkroom’s Ben Walker adds: ‘A live stream is different from being at a gig, but people sharing an experience is always as important as the music. That’s what we’re hoping to recreate, a little bit. Plus, people who can’t physically get to a venue can join in, families can be part of it, people can be ‘there’ from other countries. If it’s really happening in the moment those connections can be real too.’’

The Pillow Fort Festival will run from 12.30 pm on June 6th, streamed live from Folkroom’s Youtube channel as well as via the Folkroom Facebook page. Whilst the whole day is free to watch, audience members can donate to support both the artists and food poverty charity The Trussell Trust via the festival’s GoFundMe page.

For more information about the Trussell Trust visit : https://www.trusselltrust.org/