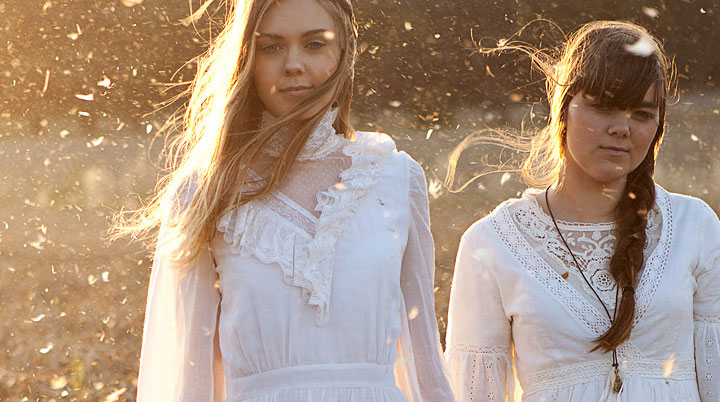 Cambridge Folk Festival is delighted to announce Swedish duo First Aid Kit as the third and final headline act. The Brit Award nominated and critically acclaimed indie-folk sisters will close the Festival’s main stage on Friday night with what is set to be an unmissable Festival highlight.

Hailing from Stockholm, Sweden, sisters Johanna and Klara Söderberg make up the dazzling duo that is First Aid Kit. Originally shooting to international fame for their YouTube cover of Fleet Foxes’ “Tiger Mountain’, the band have now released four albums to critical acclaim, with The Lion’s Roar and Stay Gold reaching Number 1 in Sweden.
The siblings’ ethereal blood harmonies will reverberate throughout Cambridge as Johanna and Klara Söderberg do what they do best, pour their hearts and souls into their enchanting music. The stunning headline set promises to include material from their latest album ‘Ruins’ along with previous gold selling albums ‘Stay Gold’, ‘The Lion’s Roar’ and debut release ‘The Big Black and the Blue’.
The critics acclaimed the new album as:

First Aid Kit join Saturday headliner, the iconic Patti Smith and her band along with Sunday night’s headliner the legendary John Prine amongst many other stellar artists.

Festival organisers Cambridge Live are delighted to deliver an eclectic line-up of firm favorites as well as newcomers from a broad church of musical genres.

Cambridge Folk Festival’s Neil Jones says:
“The addition of First Aid Kit cements a line up that is both one of our strongest and most eclectic in years. The band’s performance is set to be a real Festival highlight this summer, and their Friday night headline appearance continues what is a new era for one of the UK’s most loved and iconic festivals.”

The highly acclaimed Americana pioneer Rhiannon Giddens, will be performing on the Main Stage, as well as joining this prestigious event as guest curator for Cambridge Folk Festival.

2018 is the first year of Cambridge Folk Festival’s historic twinning with the legendary US Newport Folk Festival. This partnership will herald the beginning of a new transatlantic artistic relationship, allowing two iconic festivals that have grown up together since the 1960s to share ideas, experiences and indeed artists. The Cambridge Folk Festival is once again a must see, must experience event with a diverse line-up of artists performing over the August 2-5 weekend.

Cambridge Folk Festival is one of the longest running and prestigious folk festivals in the world. Held each year since 1965, the Festival is renowned for its unique atmosphere and eclectic mix of music. It attracts legendary traditional folk artists along with cutting edge contemporary acts, the finest American country, blues and roots artists and acclaimed singer songwriters. It is promoted by Cambridge Live which is a charity set up to act as a catalyst for inspiring cultural experiences that everyone can be part of. Cambridge Live currently reaches over 300,000 people each year who engage in their activities which include: Cambridge Corn Exchange, The Guildhall, Cambridge Folk Festival, Cambridge City Events, City Roots and e-Luminate Cambridge Festival.