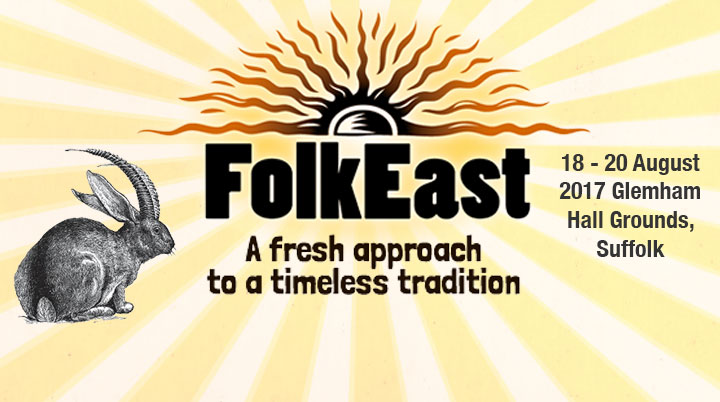 FolkEast is back for the sixth time this August 18-20. And it will be packing a punch with a plethora of BBC Radio 2 Folk Awards winners and nominees across six stages, including folk legend Jon Boden and Sam Kelly & The Lost Boys. This will be one of Jon Boden’s first solo festival performances, headlining the main Sunset stage on Friday night in a genre-hopping set that promises to get FolkEast off to a buoyant start.
Winner of the Horizon (Best Emerging Act) award at the 2016 Folk Awards, East Anglian-born Sam Kelly will bring his Lost Boys band and unmistakable voice to the main stage on Saturday night, building on their success last year.

With a third headliner still to be announced, the line-up will also include acclaimed singer guitarist Michael Chapman, esteemed veteran duo Martin Carthy & John Kirkpatrick and another outstanding duo from the younger generation, Will Pound and Eddy Jay, who made waves with their debut album Ignite last year.
Another duo making their first appearance at FolkEast will be Dorset’s Ninebarrow (Jon Whitley and Jay LaBouchardiere), their songwriting skills and perfect harmonies having won them a nomination for the 2017 Folk Awards Horizon Award (Best New Act).

Lau, three times winners of Best Group at the Folk Awards, have also been announced. The acclaimed trio comprises Martin Green, Aidan O’Rourke and Kris Drever, whose song If Wishes Were Horses is nominated for Best Original Track at the 2017 Folk Awards. Nominated in the same category is former Folk Singer of the Year Nancy Kerr, for her song Fragile Water ; Nancy will be heading to FolkEast in the star-studded trio of Simpson, Cutting and Kerr. Keeping the Irish flag flying will be the stand out Damien O’Kane Band. Coleraine-born Damien’s exciting modern spin on traditional Irish folk music saw his latest album Areas of High Traffic nominated for Best Album at the 2016 Folk Awards.

FolkEast’s irrepressible patrons The Young’ uns (Sean Cooney, David Eagle and Michael Hughes), popular winners of the 2016 and 2015 Best Group title at the BBC Radio 2 Folk Awards will be headlining the Broad Roots stage and promise another action-packed live podcast.

FolkEast was launched five years ago by husband and wife John and Becky Marshall-Potter. Rekindling the ancient Eastfolk moots on the Glemham Hall estate where for three days a year the folk from the East would meet kith and kin at harvest time for “a bit of a do”, this gathering has Suffolk running through it like letters in a stick of rock – from its locally sourced fare in The Imagined Suffolk Food Village to its suppliers, its arts and crafts, its own newspaper The Eastfolk Chronicle and its Suffolk Punch horses.

Suffolk performers will include The Broadside Boys, John Ward Band and the duo Shorelark. The Soapbox Stage, curated by local promoter Amy Wragg will introduce up-and-coming musicians and poets from the region.

Early Bird tickets for the festival are now sold out. Advance weekend tickets are available price £115(adult), £100 (full time students, senior citizens) and £70 for Youth tickets (12-17 year old) which must be purchased with an adult ticket. Family weekend tickets for two adults and two 12-17 year olds are £342. A great offer sees free admission for children aged 11 and under; camping is £12 per tent with a £24 charge for campervans and caravans.