Fire On The Rails – Track Dogs 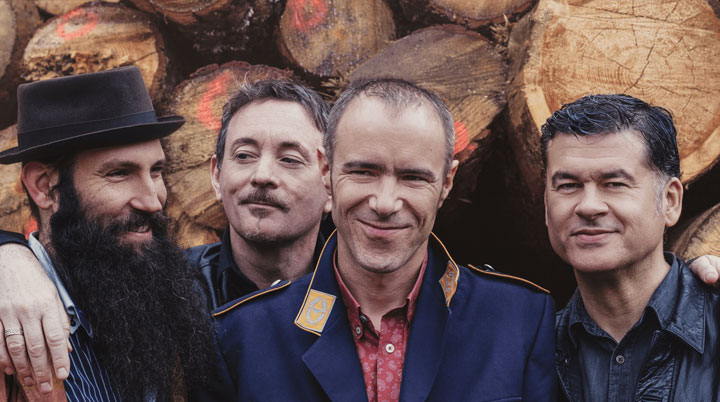 All over the place… I mean that in best possible manner. Physically and stylistically there is no way you’re going to pin Track Dogs down. Even their name shows an inclination to ramble, originally applied to itinerant work gangs on the Big Apple’s subway system. Based in Madrid , where else do you expect to find an Irish man, two English and an American? no it’s not an opening line to a joke either, the recording was across the globe, Madrid, Galway, Upminster, Cambridge MA and of course Madrid. If you were a betting man, you’d probably say that the music might be a folk/latin fusion and nine bands out of ten, ninety nine bands out of a hundred you’d be right; Track Dogs however are that one in the hundred where you’d be wrong. These guys are down-right different and stubbornly individual, the word genre was not invented for music such as theirs, within the sweep of ten tracks presented here they go from the almost easy listening of ‘ On The Last Night,’ to the tight, fast tango rhythms of ‘ All Clapped Out.’ But then opener ‘Love & War,’ is a snapshot of what they’re all about in just four minutes. Get this…yes it’s about war and comes on sort of Dylanish with just voice and guitar, then we get strings, then percussion and trumpet join in before a trio of fiddlers swell the ranks and one of them is Phil Beer as well as American Lisa Gutkin; these guys have some friends in high places!

Look, the fondly remembered fRoots motto, ‘from inspiration to enthusiasm,’ applies here, these guys have it all, melody, harmony, invention, energy and liberation. ‘Fire On The Rails,’ will flip not only your wig but your critical facilities as well, the music knows no bounds and should lay a road forward for those of open minds to follow. Investigate and you won’t be disappointed unless of course you happen to have your ears stuffed with cotton wool.