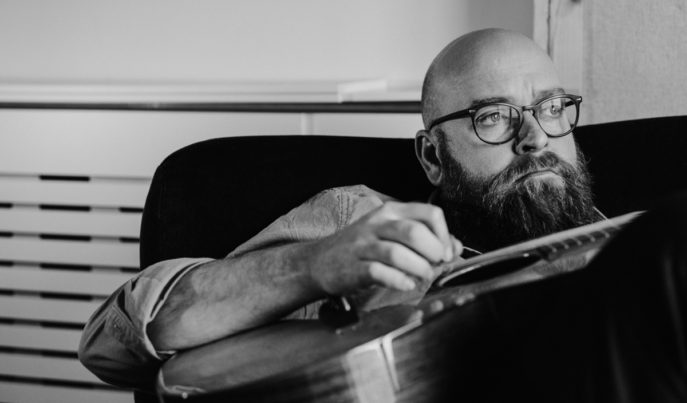 Findlay Napier is set to release his fourth album, ‘It Is What It Is’, on 1st October.

One of Scotland’s finest singer-songwriters, he has been described as Michael Marra meets Elvis Costello, a Caledonian Loudon Wainwright III or a Scottish James Taylor. His songs are full of earthy humour, hopeless love and biting satire.

Findlay continues, “The album sounded great as it was, but we wondered what it would be like with a band. Louis Abbott (Admiral Fallow) had set up a drum studio in his attic, and Euan Burton (Beth Nielson Chapman / Kris Drever) was doing incredible things on electric and double bass from his spare room. Donna Maciocia and Megan Henwood were able to record backing vocals from home, while my wife Gillian Frame was in the studio with me and layered up strings in one afternoon. The phenomenal Canadian singer-songwriter Terra Lightfoot sent us the guitar we needed for the song “American Promise American Lies”, and Gustaf Ljunggren (who played on my VIP album) sent a slide guitar solo along with brass parts because he felt it needed brass. He was right”.

‘It Is What It Is’ follows his 2017 and 2015 albums ‘Glasgow’ and ‘VIP’ (respectively). VIP: Very Interesting Persons (produced by Boo Hewerdine) was number two in the Daily Telegraph’s top dozen folk albums that year and categorically commanded him musical VIP status. In 2017 he turned those same supreme songwriting gifts and truly magnificent vocals to his adoptive hometown Glasgow on VIP’s hotly-anticipated follow-up.

Covid did not slow Findlay down as 2020 also saw him working with his wife Gillian Frame, and composer/producer/multi-instrumentalist Mike Vass on an album called The Ledger. The Ledger is a time capsule of the 50’s folk scene containing ten traditional Scottish folk songs. As well as being invited to perform The Ledger at the prestigious TED Summit in Edinburgh and at Celtic Connections,   2019 saw his collaboration with award-winning songwriter Megan Henwood tour across the UK in support of their Story Song Scientist’s EP. Their Quantum Lyrics tour and second EP are coming in November 2021.

‘It Is What It Is’ is released on 1st October 2021 via The Bothy Society (CD and digital) and is supported by a 17 date Eddi Reader support tour, followed by an 8 date tour with Megan Henwood.