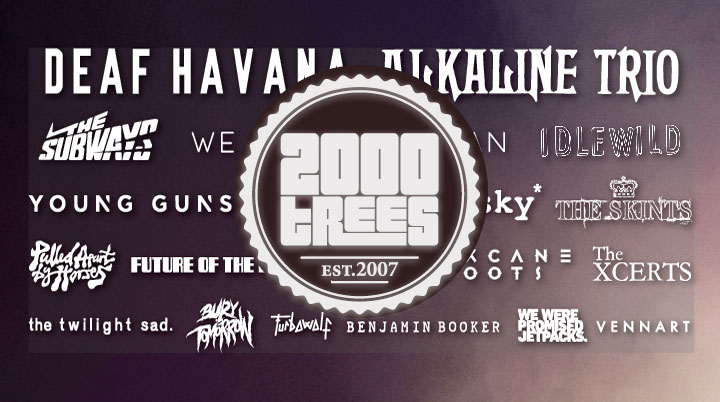 The final raft of bands has been revealed for the 2000trees Festival, as organisers confirm they expect the event to sell out.

“This is the best line-up we’ve ever had and the reaction has been amazing with tickets flying off the shelves – who would have thought we’d see the likes of Alkaline Trio, Deaf Havana and Idlewild in a field near Cheltenham?” said organiser Andy Rea.

“Despite big festivals making it as tough as possible and trying to squeeze us out, we’re flourishing with support from real music fans and it’s looking like another record-breaking year!”

The award-winning 2000trees Festival celebrates its ninth year near Cheltenham, on 9-11 July. It features the very best new and underground music on six stages, plus comedy, DJs, a silent disco, quality food and drink and children’s entertainment.

Other acts among the 100-strong bill include And So I Watch You From Afar, Mclusky*, The Skints, Future of the Left, Kerbdog, Pulled Apart By Horses, Arcane Roots, The Xcerts, Bury Tomorrow, The Twilight Sad, Benjamin Booker, We Were Promised Jetpacks, Turbowolf, Feed the Rhino and Defeater.

Affectionately known as ‘Trees’ by fans, the event was described as “the best festival in the UK” by Soundboard, a “magnificent weekend” by Rock Sound magazine and “one of the best small festivals in the UK” by The Guardian.

Tickets and more information are available at www.twothousandtreesfestival.co.uk