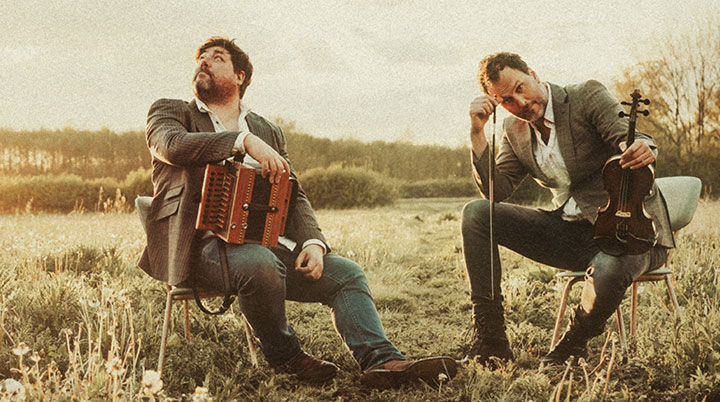 There were whoops of delight around these parts when the rumour started circulating that John Spiers and Jon Boden were reigniting their duo. With live dates in their diary for 2021, it’s pleasing to find they have a new record to draw upon too. It’s called ‘Fallow Ground’ and its thirteen tracks are testament to the wisdom of rekindling the duo’s flame.

Typical of earlier records, they draw upon their own writing as much as a comprehensive knowledge of the folk tradition that you’ll find displayed in the sleeve notes. As ever, Spiers provides melodeon and concertina with Boden on fiddle. Both provide vocals and stomp to steer them safely home. The simplicity of this format belying the depth of the musical inspiration in this new collection of songs and instrumentals.

The recordings of Peter Bellamy continue to provide rich pickings for songs that tickle the duo’s fancy. ‘Bluey Brink’, the opening track, being an Australian folk song recorded by Bellamy that tells of a sheep shearer who enjoys lots of drinking. It provides the kind of boisterous vehicle much beloved by Bellowhead fans and, certainly, destined to become a live favourite, though best to avoid the sulphuric acid drinking that’s mentioned in the lyrics. Bellamy also provides the route into ‘Butter & Cheese & All’, a track that will get the attention of all those who enjoy trying to work out the meaning of a song. Let’s just say that this traditional song is also known as ‘Cupboard Love’.

Other sources include the songwriting of Graeme Miles with ‘Yonder Banks’ and less contemporary sources such as the well known traditional song ‘Reynardine’. As well as drawing upon other sources, the duo pen a number of vibrant sets of tunes. In doing so, it helps to add variety to the whole and provides the kind of danceable music that you may be lucky enough to have experienced seeing them live.

Whilst there are few surprises on ‘Fallow Ground’ outside of them unearthing some less well known gems, that’s good as it’s a welcome return to the predictable excellent quality of earlier Spiers and Boden releases. Fans of the folk tradition can acquire ‘Fallow Ground’ with the confidence that its musical richness will bring along its own rewards.