Every Soul’s A Sailor – Stephen Fearing 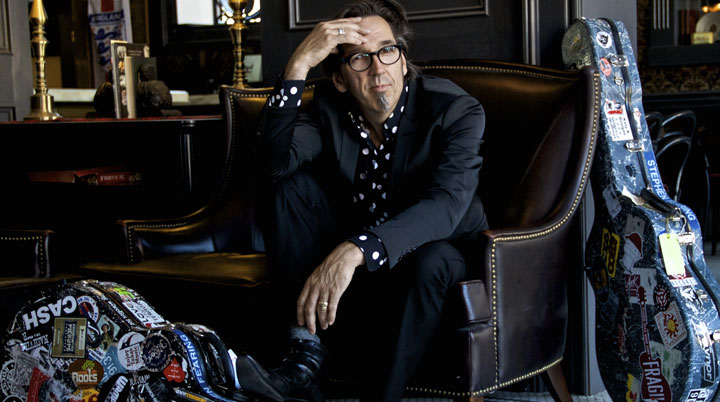 Keen observers of the popular music scene will have identified how the troubadour wandering on stage clutching an acoustic guitar is back in fashion whether you’re talking Ed Sheeran or Justin Bieber. For a number of these musicians, the format goes hand in hand with being a singer songwriter knocking out songs seemingly as often as others take breath. Having said that, it often takes a more mature singer songwriter like Stephen Fearing to demonstrate the breadth of skill required to produce songs in a variety of styles and avoid falling into the trap of being a one trick pony producing a multitude of ‘boy meets girl’ songs or similar.

As evidence of this viewpoint, I offer you the new record and ninth solo album from Stephen Fearing, ‘ Every Soul’s A Sailor ‘. The title of the album alone tells you that this Canadian writer has a way with words as do the poetic titles of tracks like ‘Red Lights In The Rain’ which immediately caught my attention and will yours too, I’m sure.

He’s a multiple Juno award winner, founder member of Blackie and The Rodeo Kings and has worked with the likes of Nick Lowe, Shawn Colvin, Richard Thompson and Bruce Cockburn. So, naturally, he’s got the ‘boy meets girl’ love song covered as you’ll find on the reflection about long lasting relationships that weaves its way through ‘Better Than Good’. Its meandering melody is guaranteed to draw a few sighs from even the most hard hearted romantic.

The title track, ‘Every Soul’s A Sailor,’ has an equally chilled out rhythm complete with a chorus that just shouts for an audience to join in the singing. That’s not to say that Stephen Fearing wallows in melancholia as the opening track, ‘Put Your Money Where Your Mouth Is’, proves with its steady driving, funk laden backing. Hitting some high notes that any soul singer would be proud of, it reminds us that money buys nothing worthwhile like love, friendship or a compassion for others.

Elsewhere, Fearing throws in a slice of politics with ‘Blowhard Nation’ in a thinly disguised swipe at Donald J. Trump as he considers ‘a weird looking creature with a rug and a jowly frown’ and the thought that ‘he’s like a bad tattoo and there’s nothing you can do’. Sentiments that are resonating around the world of music and the arts as I write this review.

Oh, yes, and ‘Red Lights In The Rain’ comes up with an emotionally charged, poetic lyric about leaving life and love behind. That metaphor of travelling a wet and lonely road is well worn but like all good songwriters, Stephen Fearing finds a way to add some sparkle with this song. Indeed, the whole album stands up as evidence of how songwriting might cover common themes but it needs someone special to add something special.